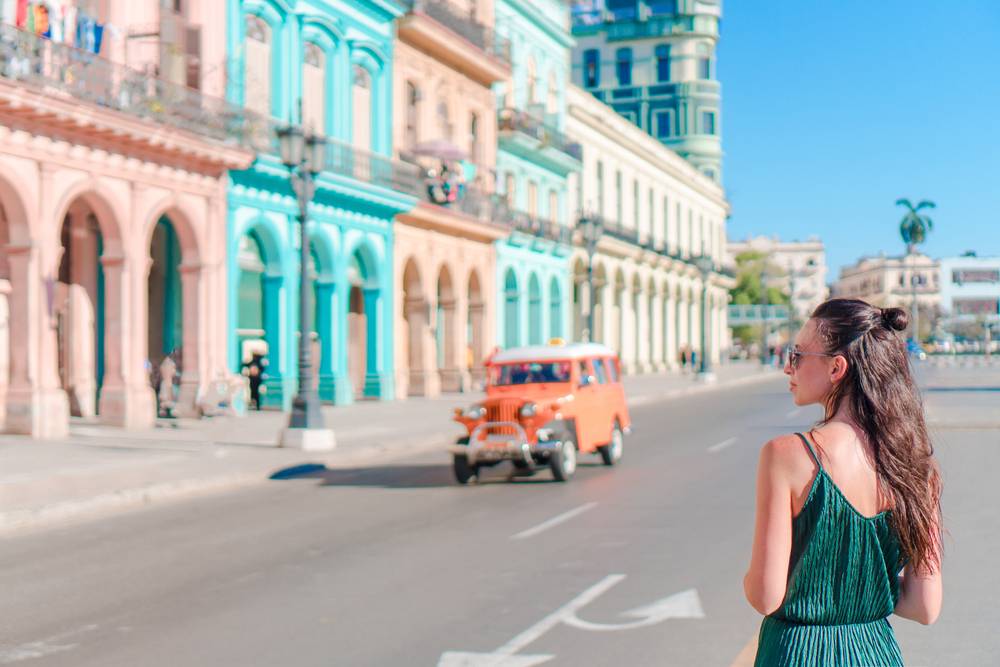 Havana is the soul and heart of Cuba, it is its capital, its most representative city, its pride. Havana has its own personality, which will captivate you with its colorful facades and hidden corners, in which you will always hear Cuban music playing in the background. It is a city full of places to discover and we recommend at least two full days to explore Havana. Here is Espiritu Travel recommended things to see in 2 days in Havana. You will discover a great city on your trip to Cuba.

The best way to explore Havana is by walking through its streets, meander along the narrow lanes, chat to the locals, climb the Spanish-built fortresses, feel the pulse of the music, and savor a coffee at one of the charming plazas where Cuban Baroque meets Art Nouveau. On your trip to Havana with Espíritu Travel you will visit this magical city trapped in time accompanied by your local expert guide.

Two days in Havana: What can you see?

Let me start by saying that the best way to start exploring Havana or any city is by taking a guided tour. What better way to visit a city than with a local guide who will not only show you the tourist places but also those that only the locals know.

Take a look at our Long Weeked in Havana trip plan and get inspired.

During your 2-day visit to Havana you have to explore Old Havana neighborhood declared by UNESCO a World Heritage Site. It is called Old Havana because it is the oldest part of the city, it has narrow cobbled streets and buildings with colonial, baroque and art deco architecture. This Havana neighborhood hosts some of the most important monuments, museums and churches.

In Old Havana you can visit the port, the Official Center, which to the old center of the city. You can walk down Obispo Street, full of shops and very frequented by visitors and locals. Some of the traditional coffee shops such as Floridita and Café Paris are also located in Old Havana.

The four squares of Old Havana

One of the best ways to explore Havana is by visiting the 4 most famous squares of the city. At the end of Obispo Street is the Plaza de Armas, surrounded by the main buildings of colonial Havana: the Museum of the City, formerly the Palace of the General Captains; the Palacio del Segundo Cabo, the Castillo de la Real Fuerza, an example of Spanish military constructions in Cuba, and the Templete, where the first mass was celebrated in the town of San Cristóbal de La Habana.

Once in the Plaza de Armas you will be very close to the Plaza de la Catedral, another of the most important buildings in the historic center. Right there you can visit the majestic baroque-style church that gives the site its name. It is surrounded by the Colonial Art Museum and the Callejón de la Chorrera, where you can have lunch or dinner in any of the restaurants that are inside.

Time for a mojito!

After a lot of walking, you will probably feel a little thirsty; But don’t waste your energy, take advantage of the proximity of La Bodeguita del Medio. Just 50 meters from La Catedral you can enjoy a “mojito” as Ernest Hemingway would have done. You could also visit the defensive cordon that protected the city back in the 16th century, the emblematic castle of the Tres Reyes del Morro and the fortress of San Carlos and San Severino de the Cabin. To the east you can also visit Castillo de la Real Fuerza, crowned by La Giraldilla, one of the symbols of the city.

You leave Old Havana without going through El Capitolio, it is simply impressive. Built in the early 1920s The Capitol is a copy of the US Capitol building in Washington, D.C. Today it is the new home for Cuba’s Communist parliament.

You can finish your first day in Havana taking a classic car ride though its streets and stopping in el Malecón to enjoy the sunset and capture the city at sundows with your camera.

If you are a photography lover check out our Havana Imagined Photography Workshop 8 days trip plan here.

You could also visit the Partagás Tobacco Factory. Don’t confuse this factory with the Partagás store, which is located behind the capitol building. That’s often referred to as the “Partagás Factory” because it’s located at the base of the old facility. The building’s facade has become a rather iconic image, but the old rolling and production spaces are now closed, and the shop is just that: a cigar store (one of Havana’s Casas del Habano) and a major tourist destination. The real Partagás Factory relocated to the corner of Calle San Carlos and Penalver Street in Central Havana a few years ago.

You could finish the day visiting the community art project of Fusterlandía. At nine in the evening you have to be alert to listen to El Cañonazo at Castillo del Morro.

The tradition begins at the end of the seventeenth century when Havana, to protect itself from the frequent sieges of corsairs and pirates, was surrounded by a wall with doors closed at eight at night and opened at four thirty in the morning. To announce it, they fired a cannon from a ship located in the harbor.

Finish the day by experiencing Havana’s famously vibrant nightlife. In the evening visit one of the many night clubs with live music like the unique Fabrica de Arte. The list of things to do in Havana in two days is endless and the best way to discover the secrets that its streets hide is by being accompanied by Espíritu Travel local guide. Planning your trip to Cuba with Espíritu Travel is warranty for a genuine and culturally inspiring experience in the Pearl of the Caribbean.