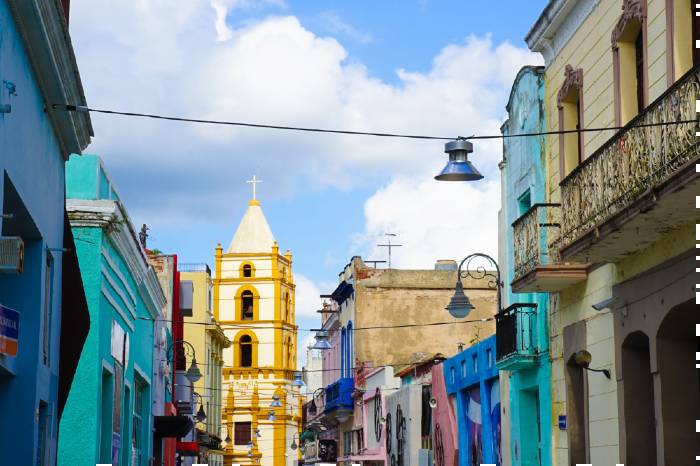 In the heart of Cuba, between Ciego de Ávila and Las Tunas, you will find the largest province of the Island, Camagüey a must see destination on your trip to Cuba. This city is one of the four Cuban cities declared  World Heritage by Unesco (Havana, Trinidad and Cienfuegos and Camagüey), your visit will not leave you indifferent, it is one of the most authentic cities in Cuba and here are some must things to do in Camagüey

The city was declared World Heritage Site in 2008, positioning this beautiful colonial city and its beaches as a popular destination to visit when traveling to Cuba. It is the perfect stop between Santiago de Cuba and Trinidad, from Espíritu Travel we invite you to discover this magnificent city on your customize trip to Cuba.

Discover 14 things to do in Camagüey

First of all, you should know that the historic center of Camagüey is a tangled and labyrinthine set of streets that apparently seem like the construction of the city was done without any order and in a chaotic way. However, the reality is that this chaos was originated in a premeditated way, to avoid frequent pirate attacks and to disorient their attackers.

The Cathedral of Our Lady of Candelaria, located in Ignacio Agramonte Park, is a religious building built in 1748, where a chapel dating from 1530 had previously been erected. This church was renovated in 1998, when Pope John Paul II visited Cuba, so it is in very good condition. The Virgen de la Candelaria, which gives its name to the building, is the patron saint of the city.

Plaza San Juan de Dios is one of the most characteristic corners of the city of Camagüey and the only plaza in which the original layout and buildings have been preserved. The architectural dates from the 18th century and was declared National Monument in 1978 and Cultural Heritage by UNESCO in 2008. In the plaza you will see very old buildings, such as the church and the old hospital, both consecrated to San Juan de Dios. You can buy some souvenirs in the stalls of the plaza!

Another of the essential squares in Camagüey and especially beautiful at sunset is the Plaza del Carmen, which shares its name with the cathedral in the square. This plaza is surrounded by colonial buildings and in the center, paying attention to everything that happens in Camagüey, they watch and whisper “Las Chismosas”, a sculptural ensemble by local artist Martha Jimenez.

In addition to being the park where you can find Nuestra Señora de la Candelaria’s church you can also visit the town hall. The Agramonte Park takes its name from one of the most important leaders of the war of the Ten Years, Agramonte, who organized the Camagüey cavalry, in front of which he achieved victories against the Spanish colonialist troops.

Legend has it that in 1601, a figure emerged from the waters and that from that moment it became a place of worship. In mid-seventeenth century you could see a modest building that was destroyed between 1744 and 1747 to build the church that we see today. Curiously, in 1756 there was still a temporary wooden temple with a tower of about 35 meters (it was surely impressive!).

This impressive theater, opened in 1850, has the capacity to accommodate more than 1,500 seated spectators, in addition to a gigantic stage and numerous windows to provide it with ventilation. The theater was built after the Havana theater: a few wealthy Camagüenses formed a limited company to be able to build this impressive building.

In this very interesting building, which stands out, again, for its architectural qualities, and which is currently run by the Agency of Artistic, you will not only be able to listen (and buy) the music of local talent, but learn about its history and dance some salsa!

This church is probably the most important in Camagüey and is easily identifiable by the strident yellow of the facade. It can be visited for free.

Previously known as Plaza de la Merced, it changed its name after the triumph of the Revolution. It houses some of the most beautiful buildings in Camagüey, such as the Santa Cecilia convention center.

Another beautiful building in the Plaza de los Trabajadores is the Iglesia de la Merced. Under the altar there are some old catacombs of the church, which can be visited with a donation. You can see some relics, tombs and some skeletons.

Parque Casino Campestre, officially Parque Gonzalo de Quesada, is a green area in Camagüey. In fact, it is the largest urban park in Cuba. It is a good place to shelter from the heat.

All kinds of activities and concerts are held, hopefully during your visit to Camagüey there will be a live concert in the park. Near the entrance to the park there is a monument dedicated to the Spanish airmen Mariano Barberán and Joaquín Collar. Together they made the first non-stop flight between Spain and Cuba in 1933. The Camagüey baseball stadium is also located within the park and watching Cubans play is quite a spectacle.

What was the former house of Ignacio Agramonte, is today a museum dedicated to the nationalist leader. Located in the Plaza de los Trabajadores, the beautiful house built in 1750, has two floors and has a beautiful interior courtyard.

The museum hosts documents of the Wars of Independence, objects of Agramonte and old furniture. Near this place, at 58 Calle Hermanos Agüero, is the birthplace of the famous Cuban poet Nicolás Guillén.

The neo-Gothic Church of the Sacred Heart of Jesus is located in the Parque de La Juventud, above the site of the temple of San Francisco. The construction was carried out between the years 1912 and 1919.

The workshop is located in the Plaza del Carmen in front of the famous sculptures, there you will have the opportunity to chat with the artist and see her work on site. She also exhibits and sells some of her works, perhaps you will find the perfect souvenir to take home from your trip to Cuba. Visit our article about supporting Cuban culture.

It is a beautiful white sand beach on the outskirts of Camagüey where you can relax while enjoying the sound of the sea. In addition, in Santa Lucia there are impressive seabeds and you can see bull sharks, but please do not participate in the show that they do by feeding them, be a responsible traveler. Find out more information about where to snorkel in Cuba here.

These are our recommendations of things to do in Camagüey that you must see when you travel to Cuba. There is no better way to do it than accompanied by our local guides who will tell you the history of this beautiful colonial city while you get lost in the streets of Camagüey. Our trips to Cuba are designed with the aim of showing you the real Cuba in the most unique and authentic way. Travel to Cuba with Espíritu Travel tailor made trips and discover all the things you can do and see in Camagüey, visit our Explore Cuba Trip and discover our suggested tours in Camagüey.