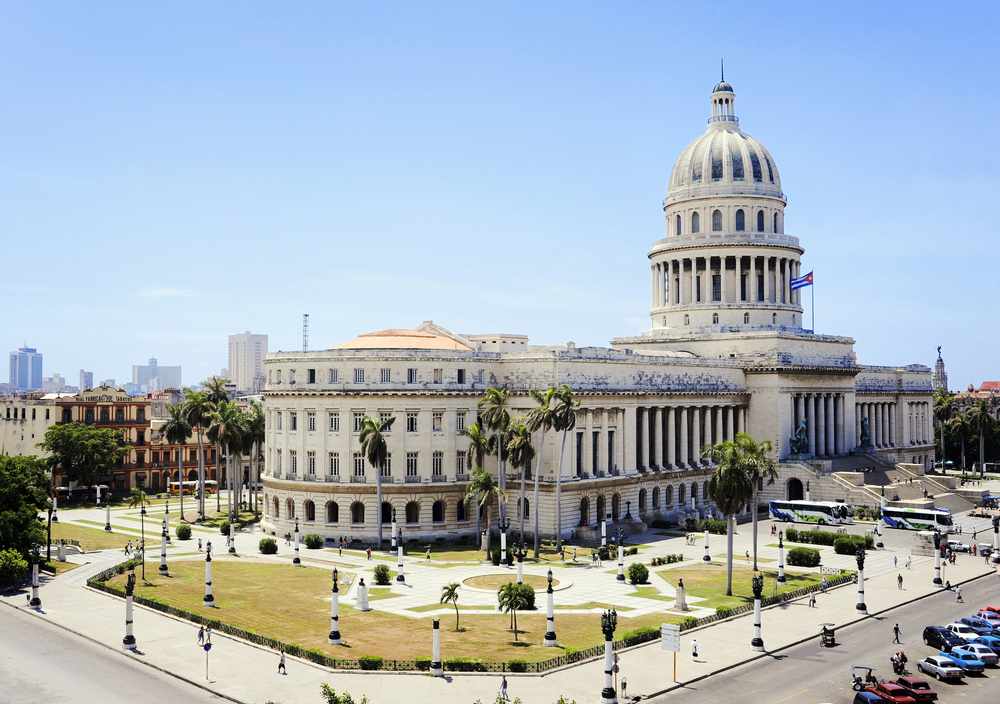 The National Capitol, one of the symbols of Havana, received the National Prize in Conservation and Restoration of Monuments 2021, in recognition of the heritage rescue work led by the historian Eusebio Leal Spengler. The deputy director of the Office of the Historian, Perla Rosales, received the award.

Built in 1926, the National Capitol of Cuba is one of the most emblematic buildings in the city of Havana and a mandatory stop during your trip to Cuba with Espíritu Travel.

The Capitol of Havana

The National Capitol of Havana was built in 1929 under the direction of the architect Eugenio Raynieri Piedra, commissioned by then Cuban President Gerardo Machado. The building hosted the two houses of Congress and the legislative body of the Republic of Cuba. Inspired by the Pantheon in Paris, St. Peter’s in Rome, and the United States Capitol, the building features a neoclassical façade and a dome that reaches 91.73 m in height.

Unlike it’s almost twin building the Capitol in Washington DC, the Havana Capitol is one meter taller, one meter wider and one meter longer and it currently houses the National Assembly.

How was the Capitol of Havana built?

In just three years, 8,000 specialized workers were precisely coordinated and with the help of the American participation in the technical aspect the most advanced means for the time were used to build the Capitol. The construction of the Capitol began on April 1, 1926 and in May 1929 the building was practically finished.

The National Capitol was built with white chaplain limestone and granite. Its elegant 62-meter stone dome is topped with a replica of the bronze statue of the 16th-century sculptor Giambologna, and stands out on the city’s skyline. On the top floor, right in the center below the dome, houses a brand new 25 carat diamond. The distance by road between Havana and any other city in Cuba is calculated from this same point

Fun fact: Despite being protected by a solid cut crystal and considered unbreakable, the diamond was stolen on March 25, 1946 and recovered on June 2 of the following year. It was never known who stole it, although popular rumors attributed the incident to a special police lieutenant from the Ministry of Education named Abelardo Fernández González.

In 1973, the diamond was replaced by a replica for security reasons and it was kept in the safe deposit box of the Central Bank of Cuba.

The entrance is protected by six gigantic Doric columns (1.55 meters in diameter and 14.10 meters high), at the top of a staircase with 55 granite steps. On both sides of the top of the staircase there are two impressive bronze sculptures, one male and one female, both 6.70 meters high, by the Italian Angelo Zanelli.

Upon crossing it, you will arrive at the Hall of Lost Steps, named for its exceptional acoustics, in the center of which is the Statue of the Republic, a gigantic bronze woman of 14.60 meters high, and more than 30 tons, which symbolizes the tutelary virtue of the people and work.

The building also houses other rooms, such as the Salón Baire, which was a conference and protocol room for the House of Representatives; the Bolívar Room, which has its original furniture with Venetian mirrors; the Baraguá Room, in a neoclassical style, which was used as a work area for the secretariats of the House of Representatives; and the Martí Room, with a beautiful chromaticism and Italian Renaissance style, which serves as a prelude to the library.

The Capitol of Cuba declared a National Monument in November 2010

In 2010 the Capitol closed its doors to begin a laborious restoration that has lasted until almost this year and that has ended up receiving the National Prize in Conservation and Restoration of Monuments 2021.

The 2021 National Awards for the Conservation and Restoration of Monuments were announced at a gala held at the Capitol in Havana. Perla Rosales shared the award with those who made possible the revival of the Capitol: the engineers Marisol Marrero Oliva, general designer; Mariela Mulet Hernández and Ismael Vázquez Rodríguez, main investors and Conrado Hechavarría Sánchez, main executor of the work.

Get inspired with our Cuban Trip Plans

Let yourself be carried away by your local Espíritu Travel local guide during your trip to Cuba. He/she will not only show you the Capitol of Cuba but all the important monuments of the city and will tell you the history surrounding them.

Planning your customized trip to Cuba with Espíritu Travel is warranty for a genuine and culturally inspiring experience in the Pearl of the Caribbean. Our team of experts will guide you in every step of your trip to Cuba.  Traveling to Cuba with us also comes with peace of mind.  We are always there in the background in case of questions or emergencies.