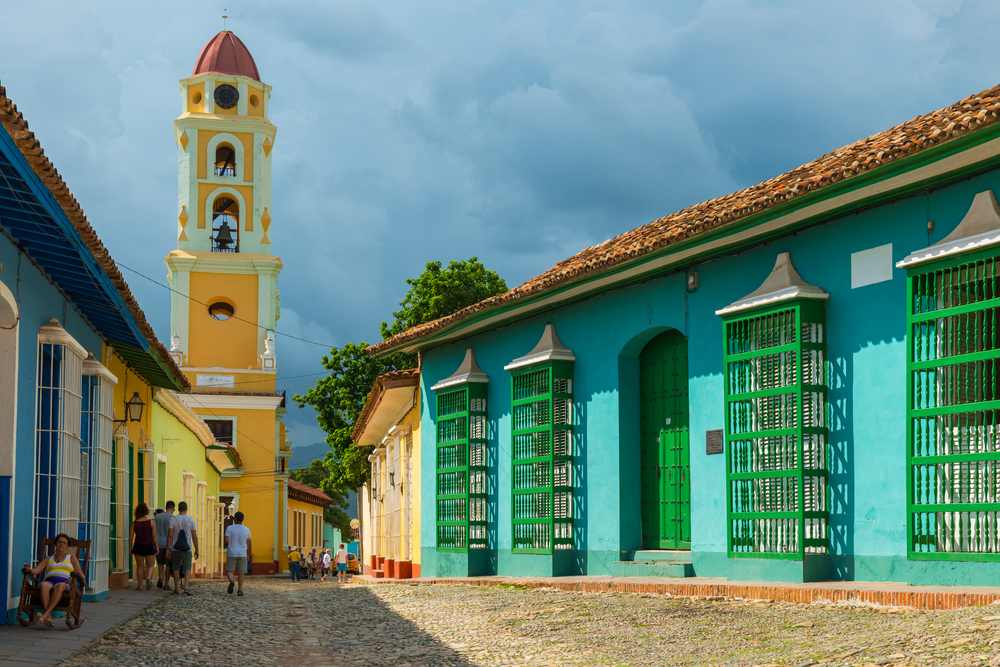 Trinidad is one of the most beautiful colonial cities, not only in Cuba, but in all of South America. Whether it is the first or the tenth time that you visit Cuba with Espíritu Travel, there are stops that you must make whenever you travel to Cuba, and Trinidad is one of them. Currently Trinidad is celebrating its 507th anniversary, the city was founded in January 1514 by the Adelantado Don Diego Velázquez.

Located in the center of the island about four hours from Havana we find Trinidad. Its streets are cobbled and each house is decorated with a different pastel color. Because of its perfect conservation, the city it is one of the most beautiful colonial cities in America, that is why in 1988 it was declared a World Heritage Site by UNESCO.

To celebrate its 507th anniversary, Trinidad will hold a series of tributes and celebrations. Among them, stands out the opening of the emblematic La Caridad theater, which after two decades of inactivity will finally open to the public. Founded in 1936 as a city theater, the building regains its splendor after hard restoration work.

In the reopening, both the effort to rescue the neocolonial-style building, always under the tutelage of the Office of the Curator of the City of Trinidad and the Valley of the Sugar Mills, as well as the effort to complete the technology, assemble the equipment and carry out the scenography design, assumed by the Ministry of Culture, and valued at more than 1.3 million pesos.

The opening of markets, restaurants and hotels such as the famous Ancón and the decorations of emblematic streets of Trinidad are also part of the festivities. Due to COVID -19 there won’t be a lot of events to prevent big crowd on the streets of Trinidad.

The city is also giving away four new homes, while a medical boarding school was inaugurated at the Dr. Tomás Carrera Galiano General Hospital, with about 13 beds, which will offer greater comfort to the medical team, as well as a hospitalization room.

Celebrate Trinidad 507 Anniversary – Top Things to Do in Trinidad

Since we still can’t visit Trinidad due to the Covid Pandemic, let’s take a virtual tour with Espíritu Travel through the city of Trinidad to commemorate Trinidad’s 507 Anniversary. The best thing about Trinidad is to let yourself be carried away by its cobbled streets, to walk through its historic center, where all the streets take you to the Plaza Mayor, the center of the city.

Trinidad has been one of the most important cities in the history of Cuba. It played a key role in the distribution of the gold that was mined in the country and transported to Spain. This glorious time was followed by a period of decline that was interrupted by the sugar plantations in the nearby Valle de los Ingenios. The beautiful colorful houses that you see know where constructed during that period of time and today, they are the main attraction in Trinidad.

Most of the emblematic buildings in Trinidad are concentrated in its Plaza Mayor. Here we find the Iglesia Mayor de la Santísima Trinidad constructed in the 19th century, the neoclassical façade is undoubtedly the most photographed spot in the city. In the square we also find other important buildings from the colonial era such as the Brunet Palace or the House of the Conspirators.

The Bell Tower of the Convent of San Francisco de Asís

Not far from the Plaza Mayor we will find another symbol of the city, the Torre del Campanario del Convento de San Francisco. Do not hesitate to climb its tower to enjoy magnificent views of the city, the sea and the mountains in the surroundings.

La Casa de la Música (House of Music) is an open-air bar, with live music and a spectacular atmosphere. It is a mandatory stop on your visit to Trinidad, it is located right next to the Iglesia Mayor de la Santísima Trinidad. Enjoy live music while having a cuba libre. It is the perfect opportunity to practice your Cuban dance moves! Book a salsa class with Espíritu Travel and take the Cuban rhythm home!

Around Trinidad you can do several day trips, so we recommend you spend at least three days in Trinidad. One of the excursions you can do from Trinidad is to visit Valle de los Ingenios, declared a World Heritage Site.

Take a look at our customize trip plan Explore Cuba to read more about this day trip.

Discover Cuba’s natural side at the National Park Topes de Collantes, a place of extraordinary beauty where the Sierra Escambray mountains and sea collide. Relax, have a picnic lunch and bathe in one of the waterfalls after hiking (moderate in difficulty) around this little piece of paradise.

Read more about this day trip in our customize trip plan Uncovering Cuba.

If during your stay in Trinidad you want to visit the nearby beaches, Playa Ancón is just 15 minutes by car from Trinidad. While relaxing on the beach, try the typical drink called saocos.

To celebrate the 507 Trinidad Anniversary, we want to underline some of the must see places you cannot miss on your visit to the city. Travel to Cuba with Espíritu Travel and discover the Island accompanied by your local Cuban guide who will explain all the secrets that the city of Trinidad holds.