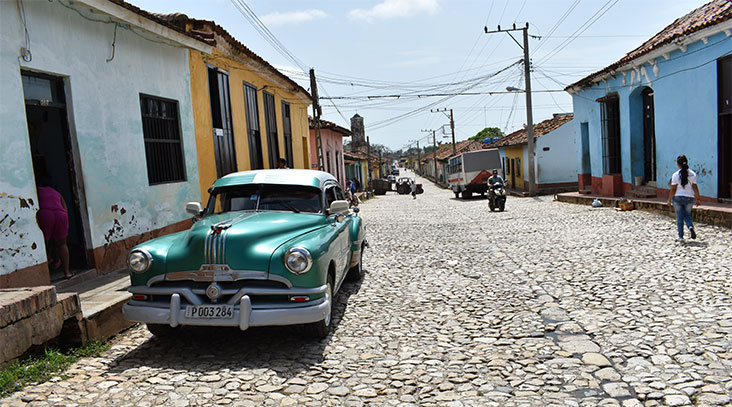 Ask anyone who has visited Cuba to name a few iconic features of this Caribbean island, and the chances are that they are going to mention Cuban cigars, white sandy beaches, rum, salsa, and classic American cars that grace the streets of Havana and other cities in Cuba.

And while Cuba has a lot more to offer other than great restaurants and simple tourist features, if you are looking to enjoy the classic features in Cuba such as classic American cars, you need to organize legal travel to Cuba before everything changes.

The classic cars in Cuba are a clear highlight of anyone who visits Cuba. From the perfectly restored masterpiece beauties in the streets to the rundown rust buckets releasing black smoke in the back alleys of Havana, Cuba has it all when it comes to classic things. And not forgetting the classic cars that will make you feel like you have been thrown back in time.

It is not just the imagery of the classic cars, but also the whole experience that comes with them. Whether you see them hailing down the Malecon street as taxis full of busy city folks, or riding cross country with ten other people, every experience you will see with these old classics is incredible.

Ford Fairlane, which is known to have been introduced in the market in 1957, is quite common in Cuba. There were many models that were released in the late 1950s such as Sunliner, Customline, and Crown Victoria. You will commonly see these cars in the streets of Havana and across Cuba.

Cadillacs, which were released to the market in the 1950s are well-known for their spacious nature; they remain a symbol of excess. However, one of the most excessive Cadillac was Eldorado, which has fins. Three people, occupying the backseat, can stretch their legs out and pack their food on the counter in front of them. This old classic has an ample boot where you can store your backpacks. Even if you don’t do anything in Cuba, riding around Havana in Cadillac Eldorado would be worth the trip. You will find a couple of them, and they boast of comfort and prestige.

Although there are not many of these old classics remaining, you will find a couple of them gracing the streets of Cuba, especially in Havana. If you want to ride in this classic Chev Bel Air, which is a convertible mode made in 1953, we can organize for you a long ride. You will find them in great shape and well-maintained.

If you search a list of big American cars that were released in the 1950s, you will probably not miss Buick Super Sedan on most lists. This model, which is said to have been manufactured in 1953, still grace the streets of Havana and you will come across several editions of this model. They have very classic looks, and you will definitely like them.

For those people who are fans of 1940s American classics, Havana boasts of some of them. Ford Super Deluxe, which is known to be manufactured in the late 1940s can be found in Havana. This old classic can accommodate three riders up front, and it dates back to over seven decades back. There are a couple of these Ford Super Deluxe’s classics that are still making rounds in Cuba. You need to visit Cuba soon because, in the next one decade, I don’t think they will be on the roads; may be in garages.

You will find many Bucks patrolling the street of Havana, with Special, Super, and Roadmaster leading the pack. These models were manufactured in the 1950s, and Cuban drivers have managed to maintain their gorgeous exterior six decades after their release to the market. You don’t need to be told it is an old classic when they are patrolling the streets, but their bodies are still in excellent shape.

Classics Chevrolets still rule in Havana to date. Most Americans travel to Cuba specifically to ride an Impala, a Bel Air, a 210, or a Deluxe. The Chev Deluxe was released in the 1950s, and they still patrol the streets of Cuba. Although they have lost the original chrome, Cubans have managed to keep them in posh condition. Whenever you visit Cuba, make sure to drive around Havana with one of these models. It is now celebrating six decades of operation.

While this is considered one of the greatest flops in the automotive industry, the convertibles you see patrolling Havana certainly look stylish six decades late. You will not find many of them in Cuba, but there is still a couple of Ford Edsel that tourist can ride. You can have a feel of the worse automotive flop of all times. Why not ride it on your way to a historic site?

This old classic was debuted in the US in 1952, and it made its way to Havana. Although extremely limited, you will find one or two original Monterrey convertibles making rounds as taxis for tourists.

You can see almost all Oldsmobile 88’s models from 1949-1959 in Havana. Some are in pristine condition, and others have lost their glamorous form and are frozen in garages. Although most of Oldsmobile 88’s model still grace the streets of Havana, you will find them missing some chrome details from the sides, but they still retain their unique grille and are in pristine condition.

Plan your trip to Cuba

There are other American classic cars in Cuba, and you will have a good time riding in any of them. They will take you back in time, and you will enjoy their comfort. Cuba received most of these cars in the 60s from Soviets and imported some from Asian countries.

While you will encounter new and old cars in the streets of Cuba, it is the old classics that make everything unique. If you get out of the busy cities and go into the countryside, you will see more old classics and fewer newer cars.

Are you planning to visit Cuba soon? Why not give us a call and we will plan your trip excellently? We have trip advisors and experienced travel guides who will advise you on places to visit, where to find all the above old classics, and other tourist sites you can visit in Cuba.

We at Espíritu Travel organize legal travel to Cuba for Americans to make your trip to this Caribbean island a success. Give us a call today! We do the planning so that you don’t have to!