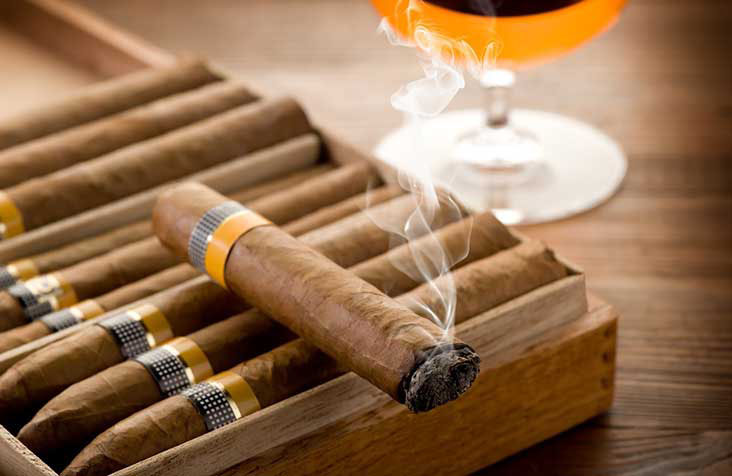 Cuban cigars are known as the best in the world, but what sets them apart from tobacco originating from other countries? The answer lies in the long, fascinating history of the Cuban cigars, which visitors like to smoke when they have traveled to Cuba for vacation.

One of the things that makes Cuban cigars popular and classy is the quality of tobacco they are made of. It is not known when the first tobacco plants were planted in Cuba, but what we do know is that they existed long before the arrival of the Spanish. The Aztecs, who were fond of smoking, used it for medicinal purposes.

They introduced the plant and the act of smoking to the Western world during the days of Christopher Columbus. The habit spread like wildfire after a short time, and soon smoking was a common practice on several continents.

However, no country adopted the use of tobacco seriously as native Cuba had. In fact, King Jaime I and King Felipe II denounced as an evil habit. Many countries like Russia and Turkey, went as far as prohibiting smoking. They even enforced serious laws and punishments on people who broke the rules.

However, one ruler, King Felipe V, saw great potential in tobacco and established a monopoly in Cuba. This monopoly lasted from 1717 to 1817, at which time there was a shift in trade from Cuba to Spanish ports. Tobacco became extremely popular so much so that it became second most popular export in Cuba, after sugar.

Tobacco was and still is one of Cuba’s major export and there is no better handmade cigar than those made in Cuba. Factory workers in Cuba make these rolls in a delicate and complicated process. Cigar manufacturers employ quality control expert to ensure that each and every roll that leaves the factory is up to par.

To truly understand the history and wonder of Cuban cigars, you must first travel legally to Cuba. While there, you can see tobacco plantations as well as factories where cigars are rolled by hand.

You will understand how the warm and humid climate of Cuba contributes to the creation of the best and finest cigars in the world. Espíritu Travel can organize your legal trips to Cuba so that you can visit Cuba as part of your Caribbean vacations.

What Is So Special About Cuban Cigars?

It is undeniable that Cuban cigars are the most popular in the world. The fact that tobacco has been grown in Cuba hundreds of years ago, with manufacturers producing cigars in Cuba since the days of King Felipe II of Spain, means that they have advanced technology to ensure only the finest and best-quality tobacco makes their cigars. All the cigars are hand made and properly rolled to ensure they reach the highest quality.

Cuban cigars stand out because they are manufactured from high-quality leaves, and a lot of attention and care goes into making every roll of a cigar. In fact, it has been estimated that a single Cuban cigar goes through over a hundred steps before it leaves the factory.

The industry has a procedure of making these cigars, and that hasn’t changed much over of centuries. This dedicated attention and care is one of the things that sets Cuban cigars apart from other cigars made in other countries.

However, this makes them more popular worldwide. Cuban cigars are very popular in the United States, and this popularity began when John F. Kennedy introduced the economic embargo against Cuba in early sixties. However, with most of these restrictions now lifted, you can visit Cuba and bring these cigars back to the US.

Another thing that makes these cigars outstanding in the market is the fact that they are made exclusively from Cuban tobacco. Many smokers are not aware of the fact that most other cigars are manufactured using a blend of several types of tobacco.

This is not a bad thing, and many smokers actually find this blend quite appealing. However, a seasoned smoker realizes that the most genuine smoke always comes from an original Cuban cigar. It should be noted that these cigars are not for the lighthearted as they have a strong taste and aroma.

How to Spot a Fake Cuban Cigar

It is not necessarily that you have to buy Cuban cigars in Cuba, as they are sold in other countries and also online. However, it is important to be careful not to buy a fake Cuban cigar. Unfortunately, many individuals and even companies produce fake cigars.

It is, therefore, sometimes difficult to tell whether or not they are fake by just looking at them, but once you have smoked it, you will know if it is genuine or not. Authentic Cuban cigars have a unique aroma because they are made from high-grade tobacco that has been harvested, cut, dried, and rolled in the right way.

Instead of shopping for these cigars from black markets, get them from reputable dealers. Look at the packaging box carefully. If you see any imperfections, then the chances are that the cigar is not genuine.

Cuban cigars are made in a precisely similar way, and the government controls the industry to ensure all the cigars produced there meet the set standards. All their cigars contain only high-quality tobacco. Thus, you will get excellent smoke out of any cigar you choose.

You can also visit Cuba to buy the real cigar from manufacturers while seeing tobacco plantations and factories to see how a cigar is made. There is a lot you can learn while having fun during your Caribbean vacations.

Want to travel to Cuba to see tobacco plantations while having fun and exploring the white sandy beaches of this Caribbean island? Well, we can organize a great trip for you. Espíritu Travel, travel experts who can help you plan your trip to Cuba so that you can visit all the best places and learn more about Cuban cigars. Reach out to us today to discuss your vacation plans with us.