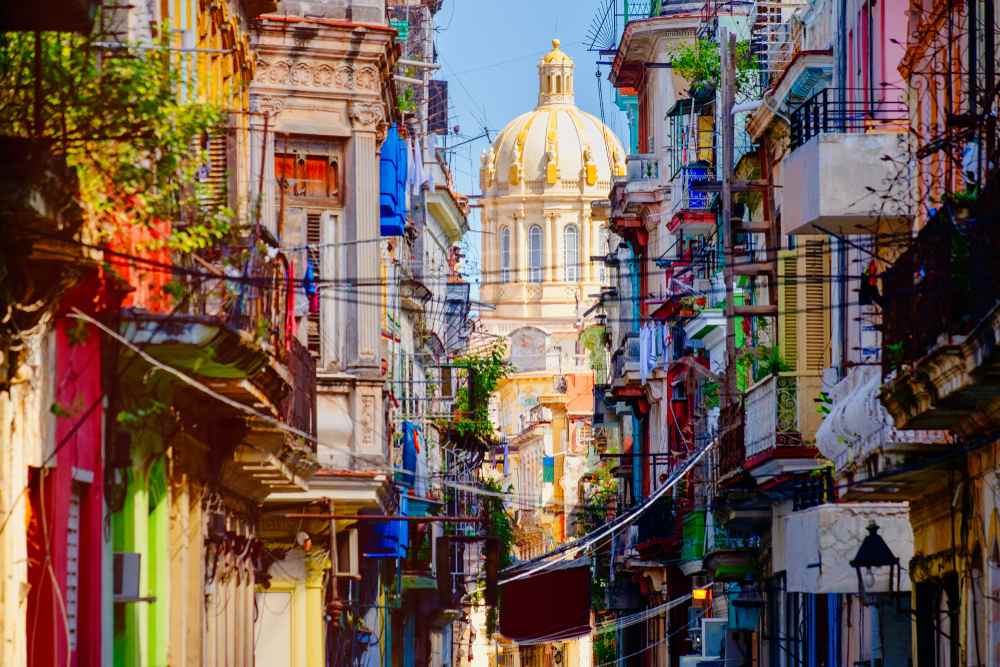 Havana is the capital of Cuba, economic-cultural center, and Cuba main tourist pole. The historic center is an architectural jewel, but it is also a historical relic, as it’s neighbors have witness great events that have marked Cuban history. Havana is a city with a strong personality, full of special places brimming with history. From Espíritu Travel we recommend you visit the capital of Cuba walking through its neighborhoods of Havana where you will see the real Cuba. Join us on your trip to Cuba and discover Havana from its neighborhoods and the people that inhabit them.

Havana has more than 500 years of history, which we can see in each facade and in the variety of fortresses, churches, cathedrals and museums that Havana has. Each neighborhood in Havana has its own identity brand and style. Continue reading if you want to discover the most famous and representative neighborhoods of Havana.

Havana is administratively divided into fifteen municipalities, but only four are the most well-known: Old Havana, Vedado, Centro Havana and Miramar. The best representation of Cuban culture it is Cubans and the best way to get to know how Cubans really live is by walking though their neighborhoods or driving a typical old car from the 50’s accompanied you’re your local expert guide.

Check out our Long Weekend in Havana trip plan here.

It is called Old Havana because it is the oldest part of the city, it has narrow cobbled streets and buildings with colonial, baroque and art deco architecture. This Havana neighborhood hosts some of the most important monuments, museums and churches. When you walk around Old Havana, during your trip to Cuba, you will understand why in 1982 it was declared a Unesco World Heritage Site.

In Old Havana neighborhood you can visit the port, the Official Center and Plaza de Armas, which corresponds to the old center of the city. You can walk down Obispo Street, full of shops and very frequented by visitors and locals. Some of the traditional coffee shops such as Floridita and Café Paris are also located in this neighborhood.

In Old Havana you will also find the defensive cordon that protected the city back in the 16th century, the emblematic castle of the Tres Reyes del Morro and the fortress of San Carlos and San Severino de the Cabin. To the east you can also visit the Castillo de la Real Fuerza, crowned by La Giraldilla, one of the symbols of the city.

This downtown neighborhood is a place marked by paradox. The deterioration of its buildings contrasts with the elegance still preserved by many of the mansions in which hundreds of aristocrats lived in the 19th century.

Centro Havana neighborhood is perfect place to capturing the essence of Havana, since most of the Cubans live and work here and on hot afternoons meet on the Malecón (also called “the largest sofa in the world”) to enjoy the cool sea breeze, until late at night.

The area is also known for Chinatown, the old Partagas cigar factory and its famous cigarette boxes and Central Park (another of the meeting places for Cubans).  Without a doubt, something that will not go unnoticed on your visit to Centro Havana will be the Capitol. Icon of the city and a replica of the one in Washington DC. Its lighthouse could be seen up to 50 miles from the high seas. Don’t forget to visit the Hall of Lost Steps!

It is the commercial district, you will be impressed by how many art deco buildings host this neighborhood of Havana. In Vedado neighborhood you can find buildings such as the National Hotel, Habana Libre Hotel, Riviera Hotel or the surprising Focsa.

La Rampa is Vedado’s main street. Here you will find clubs to enjoy music such as “La Zorra y el Cuervo” where you can enjoy Jazz or the bolero temple “El Gato Tuerto“. In Vedado neighborhood you can visit Plaza de la Revolución, where workers gather on protest days, and the most famous ice cream parlor in the city, “Coppelia“, where you must make a mandatory stop to enjoy an ice cream while resting from your walk-through Havana.

Miramar neighborhood is located in the west side of Havana, here you will find large mansions that date back from the Cuban golden age. Fifth Avenue, with its wide boulevard, becomes the main axis of this neighborhood, although Third and Seventh Avenue also deserve an important mention.

The most beautiful mansions with colonial architecture are located on the main avenues and host house embassies and public institutions, the rest of the houses are maintained, but they do not achieve such a degree of conservation due to the lack of resources to rehabilitate the buildings inside and out.

In Miramar you will find the Tropicana Cabaret and La Gran Dama de La, an emblematic place that is worth a visit.

Other neighborhoods in Havana

La Lisa, Cerro and Regla are three areas of Havana that you will not find often in tourist guides, but that are nevertheless essential to fully enjoy a city that seems increasingly cosmopolitan and full of life. Get closer to these areas and you will be able to get to know the capital of all Cubans better, as well as rejoice in the contact with its people.

Havana’s neighborhoods are waiting to be discovered. Include them in your trip to Cuba and you will be able to get to know the capital like never before, I assure you it will be a completely different experience. Don’t wait any more and come to know the neighborhoods of Havana accompanied by Espíritu Travel local guide.