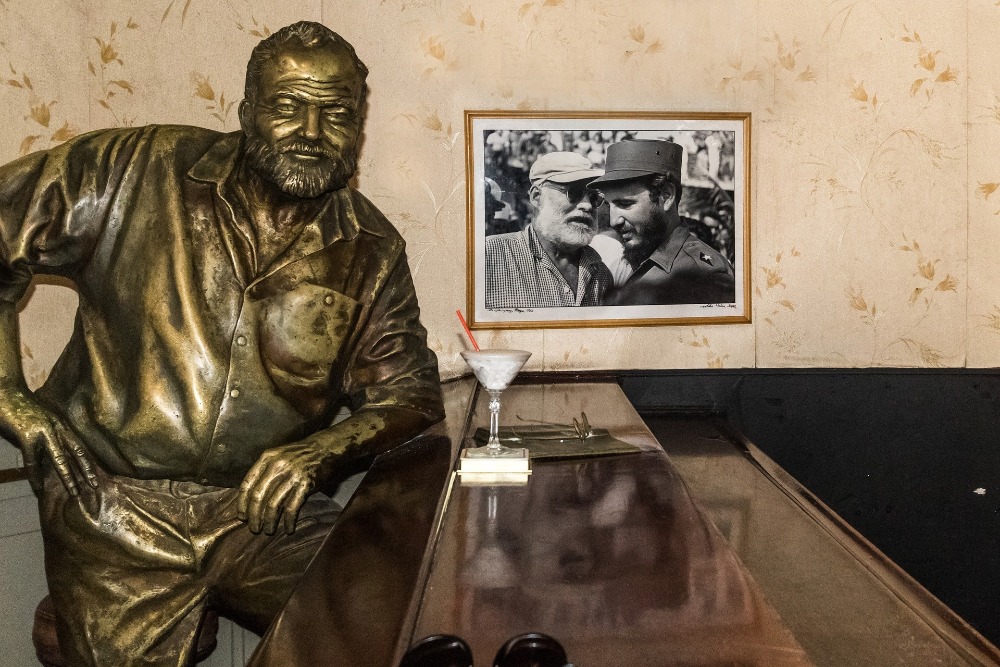 You cannot speak about Hemingway without thinking of Cuba, the long, beautiful island which embraced him like a son. In the 120th anniversary of his birth, Havana continues to be the city who charmed the great writer and and visitors have the impression that they will encounter him El Floridita’s Bar and Finca La Vigía.

When Ernest Hemingway stepped for the first time in Havana, during that trip from La Rochelle to Key West in 1928, he couldn’t possibly imagine he had arrived to his second home. After the short sail, the Orita steamer continued its journey to USA, but who knows if something had already changed  in the writer’s heart.

Hemingway was the second child of Dr. Clarence Hemingway and Grace Hall. Since his birth, on 21st July 1899 in Oak Park (Chicago), he was instructed with the conservative values of hard work, strong religion, physical fitness and self-determination; for that reason Ernest learned hunting and fishing with his father, while her mother, a dedicated singer, taught him the finest details of music. Writers like Mark Twain, R. Kipling and Robert L. Stevenson were a great influence during his childhood.

Many events passed before Hemingway‘s first encounter with Havana: He started working as an apprentice reporter for the Kansas City Star, a newspaper where he learned about active verbs, authenticity, precision and immediacy. In December 1917, he signed up for World War I and is accepted as ambulance driver. Soon after, Ernest is seriously wounded close to the Piave River, in Italy. Despite the 200 pieces of shrapnel that injured his legs, he managed to rescue an Italian soldier also hurt, and, for that reason, he won the Italian Silver Medal for Valor. Hemingway’s experience, the recovery at a hospital in Milan, and the romance with the nurse Agnes von Kurowsky, inspired his worldwide famous novel A Farewell To Arms.

After traveling to Toronto, Paris and Spain, marrying twice and writing many short stories and news, Ernest Hemingway passed by Havana. And the city, heterogeneous and marine, should stay in some corner of his memory, because after settling down in Key West and publishing A Farewell To Arms, he returned to Cuba.

One of the reason he established his operation center in Havana was the sea. Before returning to the city in 1933, Ernest Hemingway met Gregorio Fuentes, who became his friend and skipper of the notorious yacht Pilar.

When following  in Hemingway’s steps in Cuba, there are five places that one must visit: Ambos Mundos Hotel, El Floridita’s Bar, La Bodeguita del Medio, the town of Cojímar and La Vigía Farm. A customized trip with Espíritu Travel will make you understand how strong was the knot tieding him to Cuba.

Ambos Mundos Hotel opened on January 6th 1925 and it’s located on the corner of Obispo and Mercaderes Street in Old Havana. During the 1930s, the room 511 became a working place and home for Ernest and his second wife Pauline Pfeiffer. In a chronicle published by Esquire magazine in 1933, the writer describes the panorama offered by the room: the windows opened to three different points of the landscape, capturing the sea breeze and the morning sounds of the waking city.

Today, voyagers visiting what has turned into a little museum, can feel how the final draft of his formidable For Whom the Bell Tolls was written. Cuba and its difficult political and social situation also starts to appear in some of his books, such as the Green Hills of Africa and his only theater play The Fifth Column.

Each day, once he finished working, Hemingway had favorite spots to drink and share with Cubans. One of the most famous was La Bodeguita del Medio. Founded in 1942 by Angel Martinez, it was well known by its delicious food, bohemian atmosphere and refreshing mojitos. You will still find the Bodeguita near to the Cathedral of Havana, the walls are filled with signatures of the national and international figures which used to share drinks and art there: the writers Alejo Carpentier, Mario Benedetti and Gabriel García Márquez, the actor Errol Flynn and singers such as Bola de Nieve, Jorge Negrete and Carlos Puebla.

If you are walking in Old Havana, you shouldn’t miss the opportunity to pass by El Floridita Bar. At the beginning of Obispo Street is the place where the internationally famous barman Constantino Ribailagua made popular a cocktail invented by the engineers Pagliuchi and Cox of the Cuban Armed forces: the Daiquirí. The talent of this man turned it into an elegant drink which is served in the most important receptions Hemingway loved the Floridita, were he consumed tons of drinks, including the “Papa” cocktail invented in his honor. According to the legend, he set a record drinking 14 double “Papa” in a single evening. The Bar-Restaurant has a statue of the writer and a bust placed there in 1954 as a recognition for the Nobel Prize he had received in that year. It reads: “To our friend Hemingway, Literature Nobel Prize. El Floridita.”

Cojímar: Hemingway and the Cuban fishermen

Despite the changes suffered with time, Cojímar continues to feel like the fishermen’s town where Ernest Hemingway made so many friends and from where he departed to dozen of fisheries with Gregorio and his Pilar yatch.

Near to the little port, is La Terraza, a home-like restaurant where the writer used to enjoy mojitos and daiquiris, freshly-prepared fish and the stories of the old fishermen. It was there that The Old Man and The Sea was conceived, inspired in Anselmo’s life (a local fisherman), and also where the writer celebrated being awarded with the Literature Nobel Prize. Ernest Hemingway expressed about it: “… this award belongs to Cuba, because my work was created and thought in Cuba, with my people of Cojímar, from where I’m a citizen.”. He donated to the El Cobre Sanctuary (Santuario de la Virgen del Cobre), seat of Cuba’s patron saint, the Nobel Prize’s medal. It’s a gift for all the Cubans, and specially the people of Cojímar.

Those humble men never forgot the Old Papa, they employed the bronze from the propellers of their boats to create a statue which is situated at the Hemingway Square. The square was inaugurated a year after the writer’s died.

Cojímar is definitely a Cuban town with spirit and Hemingway will always be part of its memories.

This is the house I will love for me! That’s probably your thought when you arrive to Finca La Vigía. The large property where he lived 20 years is a beautiful white house surrounded by numerous tree species he brought from the trips to Africa, Asia and America. It was Martha Gellhorn who found the farm at Havana’s limits, a perfect refuge for the complex mind, where he could feel free and practice his favorite sports.

Martha and Hemingway married and rented La Vigía. In 1940, the Paramount studios payed him the right to produce A Farewell To Arms, and he used the money to buy the place. Martha and then Mary Welsh, his last partner and widow converted the farm into a real home.

There is much history inside those walls. The museum inaugurated in 1962, after his suicide in Idaho, maintains the same disposition the house used to have during his life. A great collection of films, personal documents and clothes, guns, hunting trophies and more than 1000 albums and books in different languages can be seen from every window. The visitor may picture Hemingway waking up with the sun to work in his Royal¨ typewriter, drinking a Martini, swimming at the huge pool of the property or taking the Pilar (today at the museum) to chase Nazi submarines during World War II.

Exploring the place where The Old Man and the Sea was written is exciting. A local guide will uncover the secrets, superstitions and curiosities of the man who won not only a Pulitzer Prize and a Nobel, but Cubans’ hearts.

Are you ready to follow in the steps of Hemingway in Cuba?  Contact Espíritu Travel to customize you next trip to Cuba. We are pretty sure you also will be charmed by Havana.