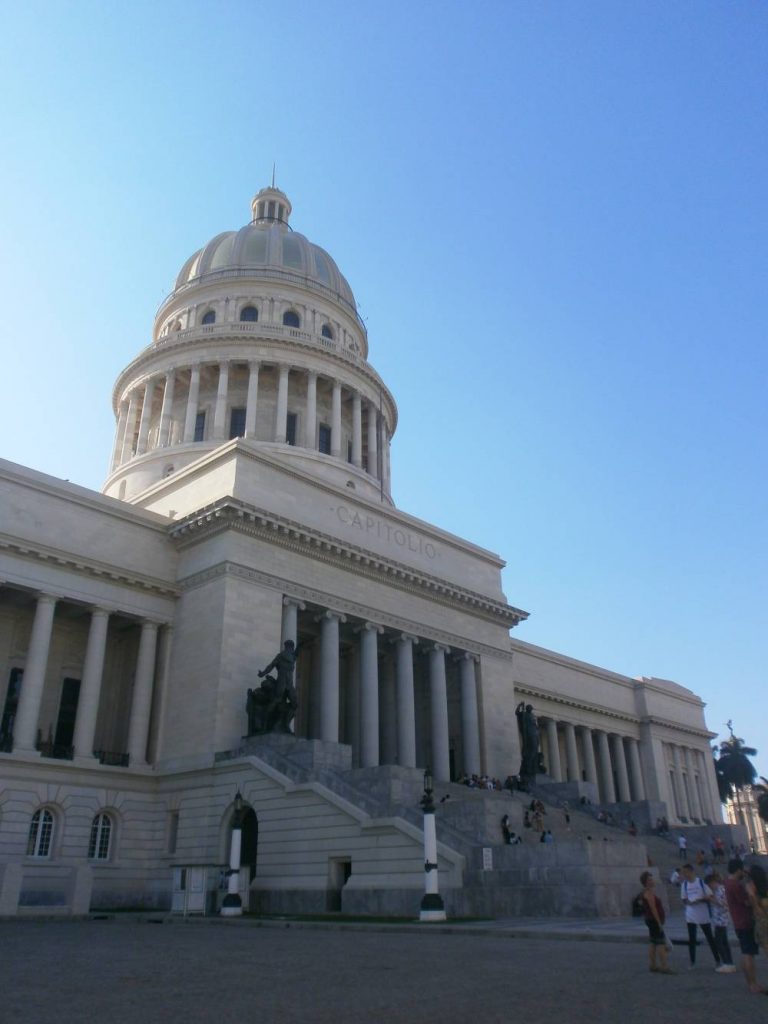 Falling in love with Havana is easy. Just the atmosphere and the good mood of the people are enough to trap you. However, if you know where to look you’ll find amazing treasures hidden in plain side. In this article we tell you what are the most famous landmarks in Cuba.

Today, Espíritu Travel takes you in a virtual tour through some of the most interesting places in the Cuban capital.

Havana: a cathedral of marvels

Do you like to learn a country’s history through its monuments? Are you a fan of old castles and towers that pirates used to attack? Then get ready to enjoy Havana because we have an excellent selection of places for you.

Havana was the mandatory stop of the antique Flota de Indias since XVI. The Spanish ships transporting all the gold of the Americas to Europe needed to obtain supplies for the long trip and to protect themselves from the Caribbean weather in the city’s beautiful bay. However the sudden richness attracted numerous pirates and corsairs, and Spain decided to fortify Havana in the best possible way. The results can still be visited today.

The Castillo de la Real Fuerza was the first fortress built by the Spaniards in Cuba and the second in America. Made out of wood, it was destroyed by the famous corsair Jacques de Sores who burned Havana to the ground in 1555. Soon after, the design of the Italian military engineer Juan Bautista Antonelli resulted in a new fortress, located near to the Plaza de Armas.  It was so safe, that it served as home from every Spanish governor from 1587 to 1762. Today, the castle keeps its military colonial charm and it hosts the Museum of the Submerged Treasures.

No one can’t deny the symbolism of El Morro in Havana! The Castillo de los Tres Reyes Magos del Morro is situated just at the Bay’s entry and it was part of the defensive triangle of the city. Used initially as watching point, it played an important role in the Havana’s defense until 1762, when the English invasion occurred.

Nowadays, the irregular polygon, with its old canons and the beautiful 108 feet height tower, is an interesting museum and a great place to take stunning photographs from the Cuban capital.

Finished in 1774 with 700 meters of extension, La Cabaña was considered once the biggest fortification of the Americas. Tunnels, galleries and huge squares for the military exercises, gave it a touch of modernity never seen before. The design of the engineer Silvestre Abarca was undoubtedly made to last.

Once the terror of prisoners, today the stone venue thousands of visitors during the International Book Fair celebrated in February. Also every evening, at 9:00 pm, the Ceremony of the Cannon Blast remembers a colonial tradition.

There are so many monuments and statues in Havana that it’s difficult to speak about all of them. In this article we would like to propose you a trip to three symbols of love and culture.

You have seen it already, The Giraldilla is represented in every bottle of Havana Club rum and has become a symbol of Havana. But did you know that it is a real statue? Well, it is!

The Giraldilla, a creation of the Cuban sculptor Jerónimo Martín Pinzón, is an anthropomorphic vane of 2 meters, which resulted to be the first statue made in bronze in Cuba. It evoqued La Giralda de Sevilla and the figure of Doña Inés de Bobadilla, former wife of the governor Hernando de Soto. The statue crowned the tower of the Castillo de la Real Fuerza where, according to the legend Isabel used to wait for his lover who departed to conquest La Florida and never came back.

Today, La Giraldilla can be found at the entrance of the castle.

Located at the intersection of 23rd and J Streets in the Vedado is El Quijote de América America’s Quixote, a monument to the greatest character of the Spanish literature: Don Quijote, of Miguel de Cervantes y Saavedra. The figure of El Quijote rides a horse and presents the sword to an imaginary enemy. It was made by the Cuban artist Sergio Martínez in a very realistic style.

The skinny and naked adventurer is not only as a tribute to the Spanish writer but a symbol of the virtuosity and the fight for justice in every path around the world.

Every traveler that has succumbed to the magic of a classic car tour in Havana is surprised by the monument to the most rebellious Beatle: John Lennon. Inaugurated in December 8th, 2000, at the park of 15th and 6th Streets in the Vedado, it is today a favorite visit point of Cubans and visitors.

The famous Cuban Jose Villa created a bronze statue with so much love and magic that seems alive. Lennon, with his intelligent eyes and reflective eyebrows waits for a talk or a song confronting the future.

It’s not easy to choose mansions and building in a city full of breathtaking examples of past epochs luxury, but here are some charming venues to uncover.

Today a charming hotel opening its Windows to Havana’s Malecon, the mansion was bought during the 18th century by the Count of Santovenia. The wealthy aristocrat celebrated his title restoring the house, enriching the decoration and adding his anagram to doors and balconies.

It was a US citizen, Mr. Lay, who many years later turned the old mansion into a luxury hotel: the Santa Isabel Hotel. Nowadays, the Santa Isabel restores its colonial beauty, captivating the soul of every visitor.

Where Empedrado Street meets San Ignacio Street a marvel is awaiting: the Cathedral of Havana. Built during the last quarter of the 18th century by the Compañía de Jesus, it became parochial and cathedral of the city when the religious order was expelled of Cuba.

It’s the most important representation of baroque religious architecture in the island, however, its internal decoration has a neoclassical style. If you are lucky enough to travel to Cuba in December you’ll see Jesus’ Birth represented in real size outside the church and a wonderful decoration to celebrate the New Year.

Inaugurated in 1929, the National Capitol is considered one of the most impressive landmarks in Cuba. More than 8000 people worked non-stop during three years to build that expensive monument to the president Machado’s greed and proud. Many architects and artists where involved in the work and even if the mean wasn’t good, the result is definitely beautiful.

There are many hidden stories at the Capitol and we invite you to discover them after the quarantine, when the totally restored building opens again its door to the public. Just a spoiler: In the Hall of the Lost Steps (Salón de los Pasos Perdidos) is the third biggest statue under ceiling in the world: the Republic, inspired in the goddess Athena.

Places you don’t want to miss

Last but not least, we introduce you these unmissable places as final push that will make you contact Espíritu Travel and start planning a trip to the unique Cuba.

A virile figure receives Havana’s lovers with a handsome and calm face: it’s the Cristo de La Habana. The gigantic statue of Carrara marble was made by the Cuban sculptor Jilma Madera, 79 meters above the sea level. She wished to represent Cuba’s cultural and racial mixture.

From the elevation of La Cabaña, in Casablanca, the Cristo de La Habana guards the dream of its author and Havana’s heart.

Located at the Avenida del Puerto is the first seawalk build in Havana. The Alameda de Paula was built in 1777 by the architect Antonio Fernández de Trebejos in those times when the sea caressed its walls. Together with the church is still a romantic spot to feel the sea breeze and enjoy beautiful concerts of classical music.

It’s not a surprise that many of Espíritu Travel’s trips to Cuba include a visit to Colon Cemetery. The emblematic venue of 56 hectares hosts more than 50000 monuments of renowned beauty and importance.  This National Monument finished in 1886, is considered an open-air museum, designed by the Spaniard Calixto de Loyra and decorated by artists like the Cubans José Vilalta de Saavedra and Rita Longa. Among the iconic mausoleums in different architectonic styles are: the Tomb of La Milagrosa, the Monument to the 8 Medicine Students, the Mausoleum of the Firemen,, the Egipcian crypt and the Tomb of the Chess Great Master Capablanca.