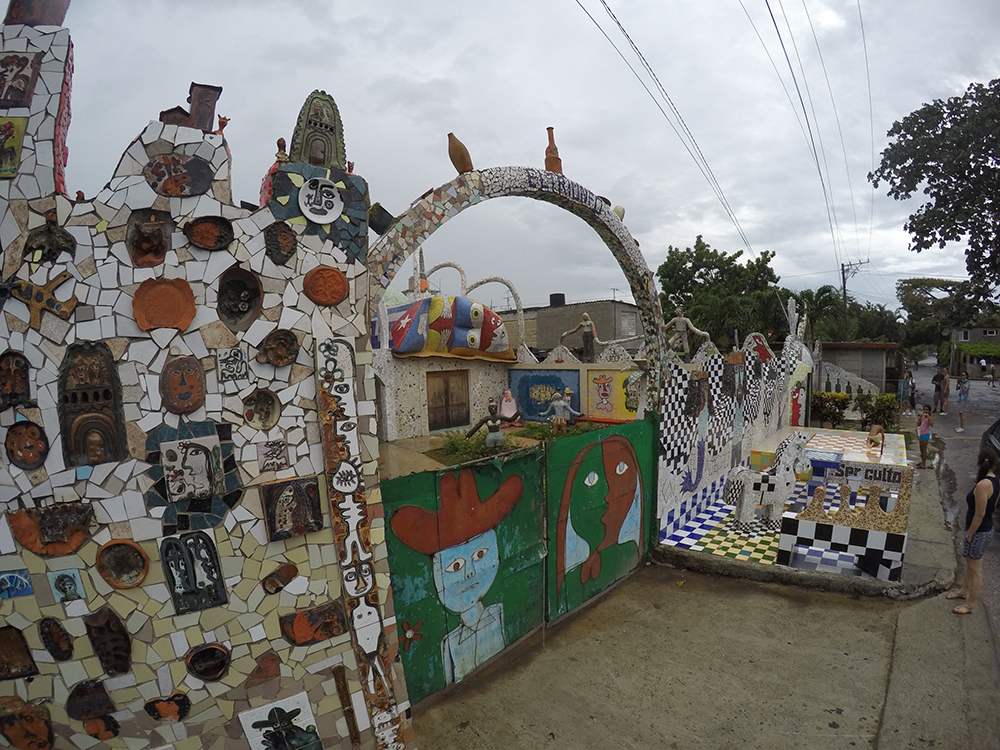 Everybody has heard something about Havana. Its enigmatic grace, its history and the natural sympathy of its people, trap visitors in an eternal boucle of arrivals and departures. But, do you know that every corner has a secret? Do you know about the art growing in the humblest neighborhoods and exploding in the unique calling of a drum or the amazing sculpture of a gifted child? Today we wanted to invite you to visit a faraway town, almost at the limits of Havana Province, which is the seat of a very unique artistic project attracting visitors from all over the world each day: Jaimanitas.

Once upon the time a Cuban artist named José Antonio Rodríguez Fuster who moved to the quiet fishermen town of Jaimanitas in 1975. He was born in Caibarién, Villa Clara Province, in a humble family and when he moved to Havana only that forgotten town transmitted him the calm of the sea and the warmth of youth. After travelling to different countries and feel the greatness of Picasso, Gaudi and Brâncuși, he decided to create public art expressing the magical and authentic Cuban imaginary. And he made it!

Colorful mosaics fragments changed and endured the walls of his house, which became art workshop. Soon the artist’s dream expanded, and image after image he built a new world of green crocodiles, loving couples, Cuban landscapes, virgins and legends under the sights of the surprised neighbors. Something never seen before was happening in Jaimanitas and Fuster wanted to take his fantasy to a new dimension: a beautiful sociocultural project engaging the entire community. The painter asked to other residents to decorate their homes and businesses, and they agreed. Today, more than 150 houses, fountains, benches, bus stops, public lamps and parks are covered by vibrant mosaics forming curious metaphors.

Fuster and Fusterlandia revitalized the esthetic and the economy of the town. The project has attracted the attention of national and international artist, tourists and institutions. Nowadays Jaimanitas is a free open-air gallery for everyone.

A trip to Fusterlandia with Espíritu Travel

During the second day of your trip with Espíritu Travel you will probably make a short ride to Fusterlandia. Arriving to the town is like an artistic adventure. Everywhere your eyes will discover flowers, mermaids, Afrocuban deities, poems in a kaleidoscope of feelings and colors. The streets are full of local souvenir shops where you can buy paintings inspired in Fuster’s style, hand-made earrings and necklaces, musical instruments and all sort of typical gifts.

During a documentary, Fuster signaled Pablo Picasso as his spiritual father, a relationship that can be observed in his style, naïve, with oneiric and tender figures.  Since that moment he is known as the “Picasso of the Caribbean”. His art has also roots in the Modernism of the Catalan Antoni Gaudi. Entering to Fuster’s former house is exploring an incredible kingdom. Visitors can‘t believe the extent of the work developed in the gallery: three floors of wonders where the importance of love, music, family is expressed and concepts are reinvented in capricious sculptures and forms.

In the murals and even the stairs you could recognize the imaginative steps of other famous Cuban painters such as Roberto Fabelo, Flora Fong, Eduardo Roca “Choco”, Zaida del Río, and Alexis Leiva “Kcho” as well as creators from Italy, Chile, Japan and the U.S. Curiously, the Kiss Door, the Silence Table and the Column of the Infinite of the Rumanian Constantin Brâncuși, inspired three new Cuban versions: Fuster’s Door, the Cubans’ Table and the Tower of the Rooster. Don’t miss the view of the third floor, a contrast of nature and art which is the real spirit of Jaimanitas.

Fusterlandia is a free project sustained by the donations of visitors and the sales of paintings, tiles and decorated bottles. An inspirational place where new jobs are generated in the community and new artist can find their own path among colors and music. We are totally sure that you will love it!

Don’t miss it: 11 tips to trip to Cuba and enjoy the most

Are you tempted? Then reserve today your New Year’s Eve in Havana with Espíritu Travel. Finish these 2019 in Cuba visiting this unique cultural venue. It will certainly be an unforgettable trip.