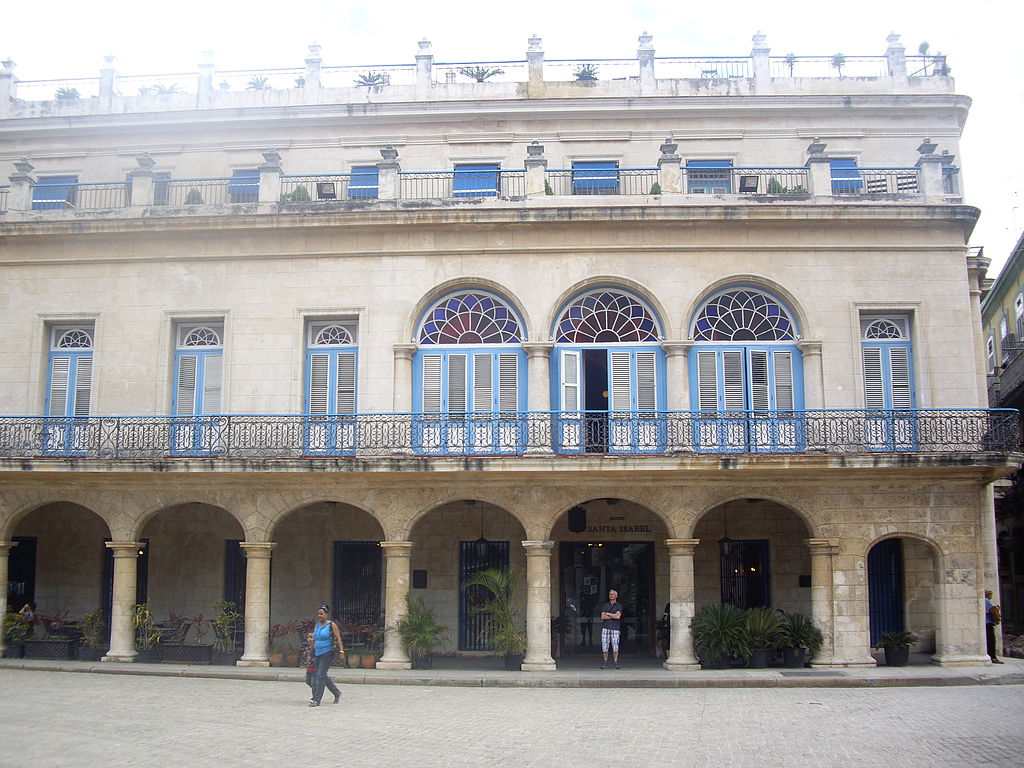 Sure, everybody loves a beautiful hotel with luxurious views and excellent service. But, what if could discover the secrets behind those walls? How many interesting stories can a hotel reveal?

In Havana, you won’t ever be disappointed. Espíritu Travel’s guides will show you the history behind the most popular establishments in a promenade full of surprises and new flavors. Just to give you a taste of what you are missing, this article will make a brief recount of the most interesting hotels in the Cuban Capital. Enjoy!

Always authentic and beautiful, the Inglaterra Hotel illuminates the iconic Central Park in Havana. There is not a single visitor who could resist the melodic voices of the singers, playing typical Cuban rhythms at its terrace. But the Inglaterra is so much more! It was inaugurated in 1875 and announced as one of best hotels in Cuba. Named after England, it fascinated immediately with its neoclassical style and Moresque influence.

The Inglaterra Hotel hosted some of the most influential people of the 19th and 20th century, attracted by the proximity to the Gran Teatro de La Habana (today, Alicia Alonso’s Theatre), the Paseo del Prado and the National Capitol. Among these figures are the famous dancer Anna Pavlova, actresses Sara Bernhardt, María Félix, Rachel and María Guerrero, the poets Rubén Darío and Julián del Casal, as well as the singers Enrico Caruso, José Mujica and Imperio Argentina. Even the dramaturg Federico García Lorca, the bullfighter Luis Mazzantini and Brazilian religious Frei Betto found their place there.

The Inglaterra has a special place in Cubans’ hearts: heroes of the country’s Independency Wars had meetings and important speeches within its walls. Major General Antonio, General Juan Gualberto Gómez and the National Hero José Martí still seem to cross the hotel’s halls with courageous steps. You’ll feel it too.

Crowning the famous Paseo del Prado with blue and yellow brushstrokes is the Hotel Telégrafo. Founded in 1860, as a two-story comfortable hostel located at Amistad Street, it didn’t take long to become one of the most important hotels of the time. The secret? It was transferred to the popular corner formed by Prado and Neptuno and resulted the first hotel in Cuba where the telegraph was used. The novel services provided by the owners Don Guillermo del Toro and Doña Pilar Somoano charmed the Cuban society.

Today the Hotel Telégrafo continues surprising its visitors with its old charisma and the pieces of history veiled after its doors.

One of the most pleasant areas of the Old Havana is the Plaza de Armas, the first square created in the city, witness of multiple battles against tyrants, pirates and conquerors. Just near to the foundational site is the Santa Isabel Hotel, a magnificent example of 19th century architecture and good taste.

It used to be the mansion of the Counts de Santovenia, a wealthy couple involved to the sugar production and the slave trade around 1830. In 1867, the North American businessman Mr. Lay acquired the palace and turned it into the Hotel Santa Isabel. Modern and famous, the Santa Isabel became the preferred hotel for scientific, artists and world travelers: it had toilets inside the rooms (a luxury in that time), excellent meals and bilingual waitresses.

Nowadays, the Hotel Santa Isabel is a living art in Havana’s center. The impressive interior patio and the Malecon’s view make it totally unforgettable.

Once considered the first skyscraper in Havana, the Hotel Presidente still remarks the elegance of the Avenida de los Presidentes. It is situated near to the Casa de las Américas and maybe that’s the reason of its cultural atmosphere so attractive for dancers, singers, musicians, writers and journalists.

Its Lobby-Museum still remembers the visit of the Spanish Lola Flores, Cleveland’s Baseball Team and the Austrian Musical Master Erich Kleiber. Very unique gastronomy, lovely cultural galas and an exclusive position are the maximum joy at the Hotel Presidente.

Read also: Get ready to enjoy: The International Jazz Plaza Festival has arrived

Surely you have heard about Cuba’s National Hotel. History and beauty combine in a single giant facing the Malecon of Havana. It was founded in 1930, occupying the same site of the Batería de Santa Clara, which was part of the defense system of the capital during the 18th and 19th century. Walking the gardens of the hotel you’ll find remains of those ancient canons that protected the city centuries ago.

For many years it was the only 5 stars facility of the Caribbean and it became the favorite of politicians, artists, sports figures and sinister mop members. Those 457 hosted figures such as Mario Moreno (Cantinflas), Libertad Lamarque, Nat King Cole, Rita Hayworth, Ava Gardner, Naomi Campbell and even Sir Winston Churchill. You will find the photographic memories of the hotel at its Hall of Fame. Our Long Weekend in Havana trip includes a typical cocktail at this National Monument. We are sure you will enjoyed.

Don’t miss the magnificent view of the Vedado at the garden and the memorable nights at the iconic Cabaret Parisién.

Just a few steps away from the majestic Convent of Saint Francis of Assisi we will find the Hostal Los Frailes (The Friars’ Hostel). At the entrance, a curious copper sculpture representing a monk, transport us imaginarily to an abbey of the Middle Age. Inside the magic continues, a set of cello welcomes us to the beautiful bar and a refreshing patio and covered with vegetation. If you want to experience what should be the cell of a medieval monk but with the present comforts, Los Frailes is for you.

Restored by the Office of the City Historian, it was the mansion of the Marquis Duquesne, Captain of the French Navy settled in Cuba since 1793. He was accepted into the Spanish Navy and became Director of the Arsenal of Havana. Duquesne was so respected, that he received the visit of the Duke of Orleans, the Duke of Montpesier and the Count of Beaujolais, in the spring of 1798.

Near to the Old Square and the remains of the first aqueduct of Havana, Los Frailes Hostel will charm you as one of the many treasures of the city.

At Old Havana’s heart there is very unique hostel dedicated to honor Cuba’s amazing cigars: the Habanos. It was designed and founded by the company Habaguanex S.A. to promote one of the most cherished products of the island.

The Hostal Conde de Villanueva, located at the corner of Mercaderes and Lamparilla Streets, used to be the former house of Claudio Martínez de Pinillo, Count de Villanueva. During the 19th century this aristocrat played an important role in the development of the tobacco production and the introduction of the railway to transport products from end to end of the country.

Nowadays, the restored mansion is considered a splendid representation of the colonial Cuban architecture: beautiful stained glass windows, arches, and a patio dominated by lush vegetation where the water sounds continuously. Peculiarly, each of the 8 rooms of the hostel and even the halls are named after famous areas and farms dedicated to the tobacco production such as Vuelta Abajo restaurant and the Paso Real de San Diego Meeting Hall. Share an exotic fish al Trapiche Colonial, grab a drink among those cedar walls and, if you love cigars, enjoy a one in a kind humidor room. Welcome to Cuba!!!

What do you think about these seven hotels in Havana? Do you like their stories? Contact us today and start planning an unforgettable trip to Cuba.