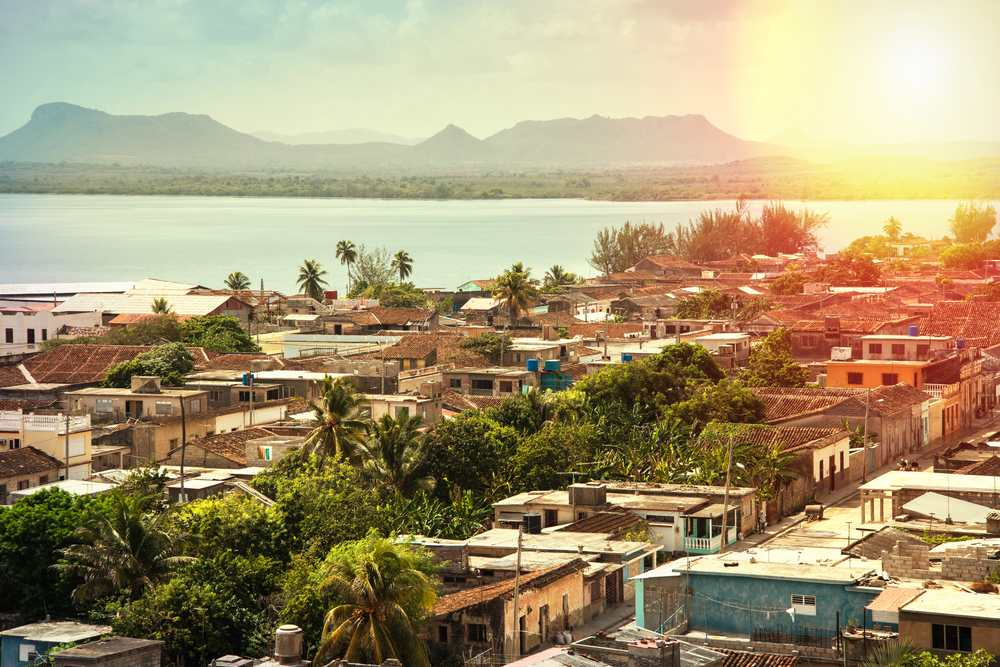 Gibara, also known as “La Villa Blanca” (the white village) is a small town located in the north of the province of Holguín – Eastern Cuba. While in colonial times Gibara had an important role due to its port and the sugar industry; Today it is a quiet place full of architectural traces of its past – ideal to relax and explore the beautiful beaches in the surroundings that reach the famous tourist center of “Guardalavaca”.

Gibara is the most important colonial architectural complex in Holguín and its urban historic center was declared a National Monument in 2004. It is located 33 km from Holguín and the trip to get to the city is already worth it, since you must pass a spectacular coastal road with incredible views. It must be a mandatory stop on your trip to Cuba with Espíritu Travel.

What to see in Gibara

It is said that in 1492 Gibara was the port through which Christopher Columbus landed in the Greater Antilles. Although the nearby Bay of Bariay is generally accepted as an authentic landing place, the truth is that this port was the most important for trade during colonial times. Although the origin of the name Gibara is not clear, one of the hypotheses is that it derives from Jibá, an indigenous word that gives its name to a type of tree abundant in the area.

Gibara is a city with a great cultural background, an example of this are it’s tourism attactions like the Museum of Natural History of Gibara, the Church of San Fulgencio, the neoclassical mansion that contains the beautiful Museum of Art and the Museum of Municipal History, or the presence of two branch libraries and a third municipal library known as Armando Leyva Balaguer, inaugurated in 1945 and which is the oldest in the province of Holguín.

The Caves of the Bakers

These caves extend for about 10 km below the ground and you can see interesting rock formations and bright stalactites. The Caves of the Bakers are located about 2 km from Gibara.

If you are a movie liver you must know that Gibara has the honor of having one of the most original festivals in the world: the International Festival of Poor Cinema which, since it cannot boast of glamor, has established itself as a good showcase for emerging stars. One of the best and most original things to see in Gibara.

Ruins of the fort “El Cuartelón”

Construction began in 1854 but a year later the new Spanish officer suspended the construction due to an alleged danger to the health of the soldiers who should live here. Gibara, along with Havana, are the only cities that had fortifications, proof of this are the ruins of the fort. Its location allows a splendid 360º view of the city of Gibara.

To know all the stories and legends of Gibara, visit the Municipal Museum, where one can learn about the history of Gibara.

The wall was built as a protection measure for the city before pirate attacks. Its construction began on January 16, 1817, days in which the founding date of the city of Gibara is considered. After the revolution, the fort was restored and today it is one of the most important places to visit in Gibara.

As for the colonial constructions that you can observe in Gibara, after centuries of struggles and natural catastrophes, the only stately home of the Sugar Mill from the 19th century that remains standing and in good condition, in the entire province of Holguín, is La Casona of Santa Maria.

Gibara Beaches and its surroundings

Matched only by Baracoa for its wild coastal setting, half-forgotten Gibara, with its faded pastel facades and surging ocean rollers, conspires to seduce you. There’s a cultural life here that seems big for a small town. It is here, in this tranquil atmosphere you can soak in the turquoise waters of the Caribbean.

Among the best-known beaches are Playa Pesquero, Playa Esmeralda and Guardalavaca, which in addition to dreamy sandy beaches also offers seabed’s that will delight all diving fans.In this area is the “Güirito-Punta de Mangle Migratory Corridor” – a paradise for ornithologists, since it is one of the most important points for bird migration.

How long do I need to visit Gibara?

The city can be visited easily in one morning and you can spend two days relaxing on the beaches of Gibara. Your Espiritu Travel expert guide will accompany you throughout your trip to Cuba and will show you all the secrets of this city. Get inspired with our 9-day trip to Cuba: Santiago and Eastern Cuba and see our suggested activities in Gibara.

Explore every corner of the Island with Espíritu Travel during your trip to Cuba. Discover Gibara, an ideal city to learn about the colonial history of Cuba and immerse yourself in its crystal-clear waters while enjoying a fantastic day at the beach.