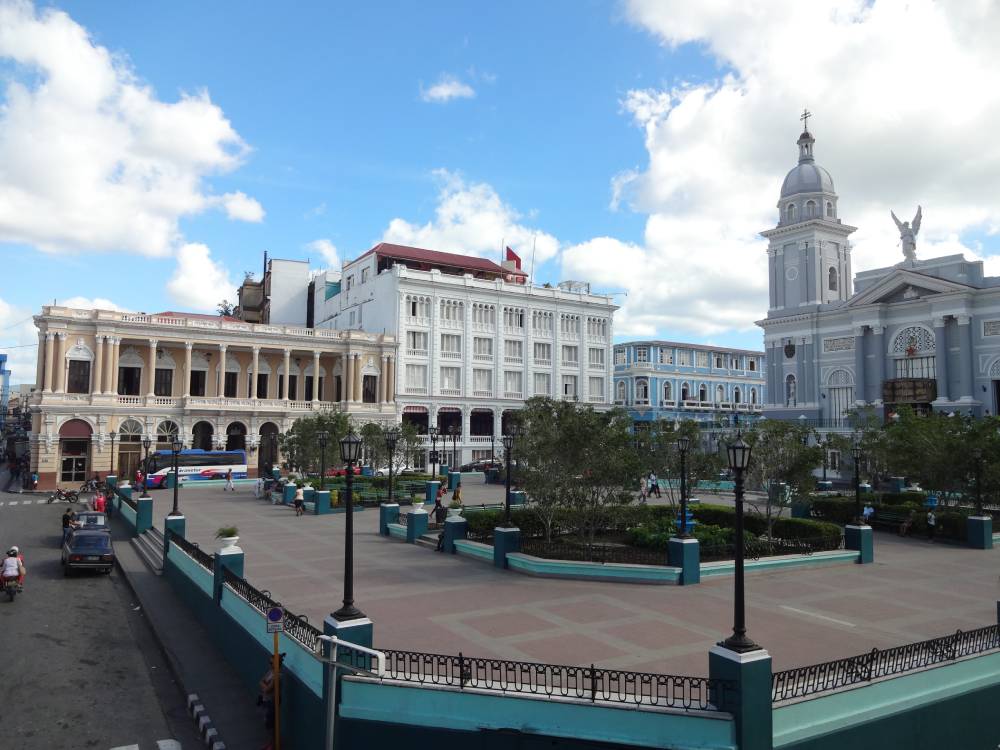 There’s so much to see in Santiago de Cuba. The rich Caribbean, African, Spanish and even French roots created an impressive cultural mixture you can feel at every corner of the province.  Espíritu Travel’s Highlights of the East package captures the dynamic of Santiago in a fascinating journey. Travel to Santiago de Cuba, it is a unique experience, we tell you what are the essential places of the city that you can not miss.

The ancient village of Santiago de Cuba was founded by the Spaniard Diego Velázquez in 1515 and soon after it became the most important city of the country until the 17th century. Its excellent location, the abundant mineral reserves and exceptional conditions of its bay made Santiago the perfect place to continue the conquest and colonization of the Americas.

During the colonial period and the early days of the new Republic of Cuba, the city played a fundamental role in every independency movement. And it was there, at the mountains of the Sierra Maestra were the Revolutionary War led by Fidel Castro was developed until the definitive triumph of January 1st 1959. For that reason Santiago de Cuba is considered Heroic City of the Republic.

In Santiago de you’ll find it all: a great university, multiple museum, breathtaking natural landscapes and beaches and a cultural heritage pretty unique. If you are ready for this adventure, follow Espíritu Travel in a route to highlight Santiago de Cuba’s best attractions:

Streets and squares: Get ready to explore

Welcome to Santiago’s heart! The Parque Céspedes is a mandatory reference to every path in this gorgeous city. Surrounded by Diego Velázquez’s House, the ancient town hall, the Casagranda Hotel and the impressive Cathedral, is the perfect break to reinvent your itinerary. Watch the street musicians and the kids playing. Relax a little and go!

Inaugurated in October 14th 1991, the Revolution Square of Santiago de Cuba has an historical and political meaning for every Cuban. It was named after the Major General Antonio Maceo Grajales, one of the bravest man and most impressive person ever existed in Cuba.

He was born in Santiago in 1845, and very early he incorporated to the Independence War of 1868. His courage, intelligence and honesty led him to be not only one of the greatest generals of the three Wars but a loved and respected figure for the army and the population. Antonio Maceo was known as The Bronze Titan, due to his strength in combat and the numerous wounds he supported (a total of 26). In a period of colonialism and racism, this black man was even respected by the Spaniards.

Santiago de Cuba dedicated to its greatest son a monumental sculpture of 16 meters created by Alberto Lescay and Guarionex Ferrer that you will find at the Revolution Square. It represents the hero in his horse and 23 machetes to remember the weapon used by Cubans during the 19th century and the protest led by Maceo: the “Protesta de Baragua”.

Today crowded with people and numerous commercial establishment, who could think that Enramadas Street was just a lane before 1603? In 1906, the tram started to circulate in this area and Enramadas became an important part of the city cultural life, thanks to the great Heredia Theatre, the Diario de Cuba (journal) and the countless activities developed in every block.

Nowadays, Enramadas preserves its charm. The largest and most populous street in Santiago de Cuba totally worth a visit.

The iconic Padre Pico has been present in national and international images since the past century. It was built in 1899 with a very unique characteristic: a stairway Street. The 52 stairs are a wonderful gazebo, which take us to the entrance of El Tivolí, one of the most authentic neighborhood of Santiago de Cuba.

Crowning the entrance of Santiago’s Bay is an exceptionally preserved fortress from the 17th century: the Castillo de San Pedro de la Roca del Morro. It was designed by the Italian military engineer Juan Bautista Antonelli in 1587 for the protection of the city, however, during decades, multiple architects added new elements to the place turning it in one of the most remarkable fortresses in America.

Today, the UNESCO World Heritage Site, is a charming example of colonial military architecture. You can explore the different levels and also visit the Piracy Museum within its walls. Don’t miss the breathtaking view of Santiago de Cuba’s Bay and the cannon firing ceremony at sunset.

Proud and splendid, the Cathedral of “Nuestra Señora de la Asunción” has survived time and many disasters. However, the current cathedral is the fourth, visiting the place we will have a real feeling of Santiago de Cuba’s history.

The original church was made in wood and finished in 1526, but, fires, earthquakes and even pirates’ attacks destroyed construction after construction. Today, this National Monument continues surprising nationals and visitors with its majesty.

The antique house of the first governor of Cuba, the Spanish conqueror Diego Velázquez, is located at the Parque Céspedes. Built around 1530, it’s probably de oldest mansion of the island with a delicate Moorish style and a representation of the French, Spanish, British and Cuban furniture from the 16th to 19th century.

While walking Santiago de Cuba, don’t miss Diego Velázquez’s House, the current Museum of Cuban Colonial Historical Ambiance. Together with the rum, the coffee and the rumba, is one of the city delights.

Currently a school and museum, the Moncada Barracks was named after the Cuban Major General Guillermón Moncada who was incarcerated there in 1893. In the humid dungeons of the fortress he contracted the disease which lead to his death during the Independence War of 1895.

During the 19th century, corrupted presidents such as Machado and Batista turned the place again into prison and torture site and one of the most important military barracks in Cuba. That’s why the revolutionary forces led by Abel Santamaría and Fidel Castro decided to attack it starting the Independency Movement. The July 26th 1953 assault was unsuccessful, but crucial for the national consciousness and the posterior Revolutionary victory in 1959. The Moncada holds now a museum with many interesting details of the Cubans struggles from 1956 to 1959. Visitors can still notice gun shots in the walls while observing the happiness of children at the school yard.

Must-see places: Santiago in and out

Around the 1860s, the Bacardí family acquired a small distillery in Santiago de Cuba. Their continued labor took them to develop a formula to transform the rough beverage produced until the moment in exquisite rum. Forty years later, the Bacardí Factory had more than 100 workers and it was well known internationally. They even made an incursion into the beer market founding the Hatuey beer deeply missed by Cubans.

You can visit the original Factory during your Espíritu Travel adventure. Although, the Bacardí family no longer produces rum in Cuba, the factory manufactures an excellent rum you can taste and buy there.

If you are keen of history, you will love the famous Santa Ifigenia Cemetery. It guards some of the most important military and artistic figures of the country: Frank País, Carlos Manuel de Céspedes and Compay Segundo are just some of them. You will be surely attracted by the Mausoleum of Jose Martí, Cuba’s National Hero. It was designed to receive a stream of light inside during morning hours. Every thirty minutes, the changing of the guard ceremony is an interesting spectacle. Next to the mausoleo is the simple tomb of Fidel Castro, who passed away in 2016.

Don’t doubt it, our local guide will shed light into every secret of the impressive Santa Ifigenia.

About 25 kilometers away from the city, you will find the Parque Baconao, a World Heritage Biosphere Reserve of wonderful beaches and green mountains. This natural tour not only includes a visit to the unique Botanical Garden of the area  but a stunning 360- view over the sea from the 1,234 meter Gran Piedra.

Cuba’s patron saint is the Virgen de la Caridad del Cobre, a mestiza virgin representing the blended cultural roots in the country and the image of hope for people from any believes. According to the legend, during the 17th century two natives and a little African slave found the statue during a violent storm and were save it by the virgin. The old chapel erected by the locals at the hill next to El Cobre copper mines to honor their virgin is today the National Shrine Basilica of Our Lady of Charity.

The beautiful pilgrimage site is located 18 kilometers away from the city. It receives people from the most distant corners of Cuba. Surrounded by innumerable flowers, promises, photographs and gifts the Virgen del Cobre seems to extend her arms to support and help every prayer. She has no only been blessed for many popes but syncretized with one of the most important orishas of the Afrocuban religions: Oshun, goddess of love, sensuality and maternity.

The basilica is definitely one of the most beautiful places to go in Santiago de Cuba.

A final tip to enjoy the most of Santiago de Cuba

Traveling to Santiago de Cuba in July is an amazing opportunity to know a different face of the city: the Carnaval. Shining colors everywhere, fantastic costumes, ancient traditions and irresistible music flooding the streets.  Does it sounds nice? Then contact Espíritu Travel today and pack comfortable clothes to enjoy the most of Santiago de Cuba’s heat.