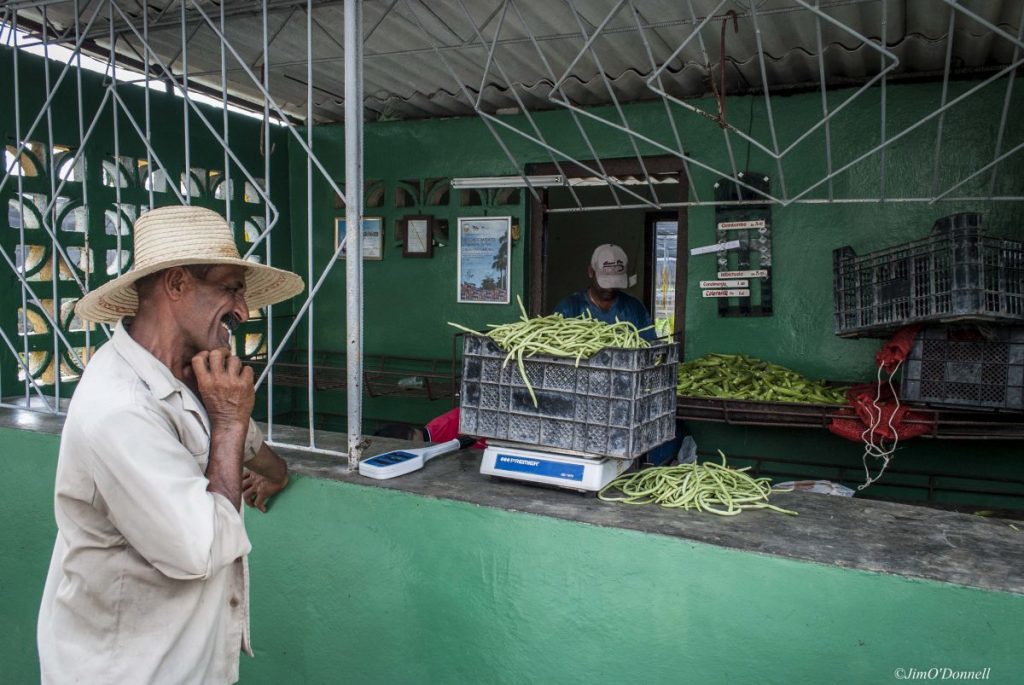 On a busy street packed with school children in the central Cuban city of Bayamo, I passed a man hauling a plastic crate full of beets. A few steps more and another man moved by, weaving in and out of the children. He was sporting a huge smile and carrying a crate packed with string beans. Then a woman went by porting carrots.

Following this stream people carrying fresh produce I jumped through a sidewalk soccer game and arrived at an urban farm located just to the west of Plaza de la Patria. A number of people were working and singing among dozens of raised beds covered in sun shades and surrounded in marigolds and rose bushes.

Cuba’s organic agricultural on the spot

Cuba’s organic agricultural system has gotten a lot of attention over the past fifteen years, particularly among Canadians and European urban agriculture and food security activists. Over the past twenty-five years the Cuban people have built a successful agricultural system that is, for the most part, totally organic. It is intensive and local. Cuba stopped using chemicals because the chemicals stopped coming to Cuba. So while Cuba didn’t intentionally embark on this path, twenty-five years on they have embraced it whole-heartedly. “It was urgency,” our Espiritu Travel guide Carlos told me.

Prior to the rise of Fidel Castro, Cuban agriculture was dominated by large plantations owned by wealthy landlords or foreign corporations. These were largely single crop systems of sugar, coffee and tobacco. After 1959 the Castro government took over many of these plantations and divided up the rest among landless rural farmers.

The state-run farms continued on the path of growing single crops and, consistent with the ideals of the Green Revolution dominating world agriculture at the time fell into a heavy reliance on chemical fertilizers and pesticides. Meanwhile, the rural population fell by half. Cubans were moving to the cities.

By the 1980s Cuba had a mechanized, large-scale agricultural system that was highly dependent on chemical fertilizers and pesticides imported from the Soviet Union and the eastern bloc. And then the Soviet Union collapsed.

The Cuban economy in general took a tremendous punch from the loss of Russian and Eastern European markets but the agricultural sector, long reliant on the import of chemicals from the now non-existent USSR, took an incredibly hard hit and by the end of 1989 Cuban’s were suffering a severe food shortage. Vegetable production went to almost nothing.

When asked about this time, Carlos just shakes his head not wanting to remember. “Those were rough days,” he says. Every Cuban who lived through that time has stories of how they traded clothes or art or whatever they had just to get food. From 1989-1995 per capita caloric intake among the Cuban people dropped about 40 percent. Cubans lost, on average, somewhere between fifteen and twenty pounds of their body weight.

As I’ve written before, I have never in all my travels met a more resilient and adaptable people than the Cubans. How can you do something with nothing? Travel to Cuba. In the cities, unused lands were quickly brought under cultivation by individuals and neighborhood associations. This transformed the urban landscape and reduced the transportation costs of bringing food from rural areas to the cities. Tens of thousands of people, made unemployed by the economic collapse suddenly had jobs.

By 1992 the Cuban government diverted thousands of other unemployed workers to state farms and by early 1993 fruits and vegetables were starting to show up on the streets again. Vegetable production in urban agriculture in Cuba rose from virtually nothing in 1994 to 4.2 million tons in 2006 almost completely reversing the fall in caloric intake seen during the early 1990s. Things have only improved since then and today urban gardens now produce about 60 percent of all vegetables consumed in Cuba.

Today Cuba boasts about 575,000 farmers working either on their own plots of land or within cooperatives. Many of these farmers are prospering and a large number of Cuban professionals find that they can earn more as farmers than they can in their former jobs as nurses or teachers. Increasingly market-oriented economic systems and the demand created by the growth of tourist-oriented paladares have further helped drive Cuba’s organic agricultural system.

Cuba’s urban agriculture use a system based on the ideas of agro-ecology and permaculture. These practices utilize natural systems and connections to grow food more efficiently. For example, by utilizing raised beds the farms can better control the quality of their soil and the amount of water they use. Further I saw many uses of companion planting, where plants are paired with others to augments growth. For example, carrots and tomatoes make good partners as do beets, onions, garlic and lettuce.

In this system flowers are also used to attract beneficial insects to manage pests. Flowers such as the marigolds I saw in Bayamo are planted at the ends of the raised beds to pull pests away from the food crops. Ladybugs are used to deal with aphids in place of chemical pesticides.

The farmers of Cuba’s urban agriculture are also masters at the use of space. The use of rooftop gardens, small plots, balconies and patios is very common. It is estimated that there are more than 100,000 patios and small parcels under cultivation in Havana alone. Government regulations stipulate that that all urban agriculture must be organic in order to protect the health of residents.

Larger suburban farms can also been seen on the outskirts of most cities. Recently President Raul Castro announced more financial support and incentives for rural farmers and under a recent law over a million acres of lands were distributed to about 1.5 million people.

So there is defiantly a positive story here to tell. Cuba has been able to grow a tremendous amount of food with minimal use of chemicals and petroleum products, massively reducing the nation’s carbon footprint. There are many lessons to learn. But I caution against being too Pollyannaish.

The fact is that Cuba does not produce anywhere near what it needs food-wise. Today, agriculture is only about five percent of Cuban GDP. Cuba imports between 70-80% of its food and the World Food Program ranks Cuba’s agriculture as “poor” and “inefficient”. Increasingly Cuba is looking to Brazil as a food source.

And there are threats on the horizon. The Cuban government has talked about “updating” their agricultural system, but it remains unclear what this means. Without a doubt large multinational agricultural companies are looking to the large untapped markets available in Cuba.

But what I found among the Cuban farmers I spoke with was a combination of a healthy skepticism when it comes to industrial agriculture and a pride in what they have accomplished.

Can Cuba avoid being pulled back into an agriculture of chemicals, carbon-use, monoculture and insecurity or will they be able to continue to plot their own path forward?