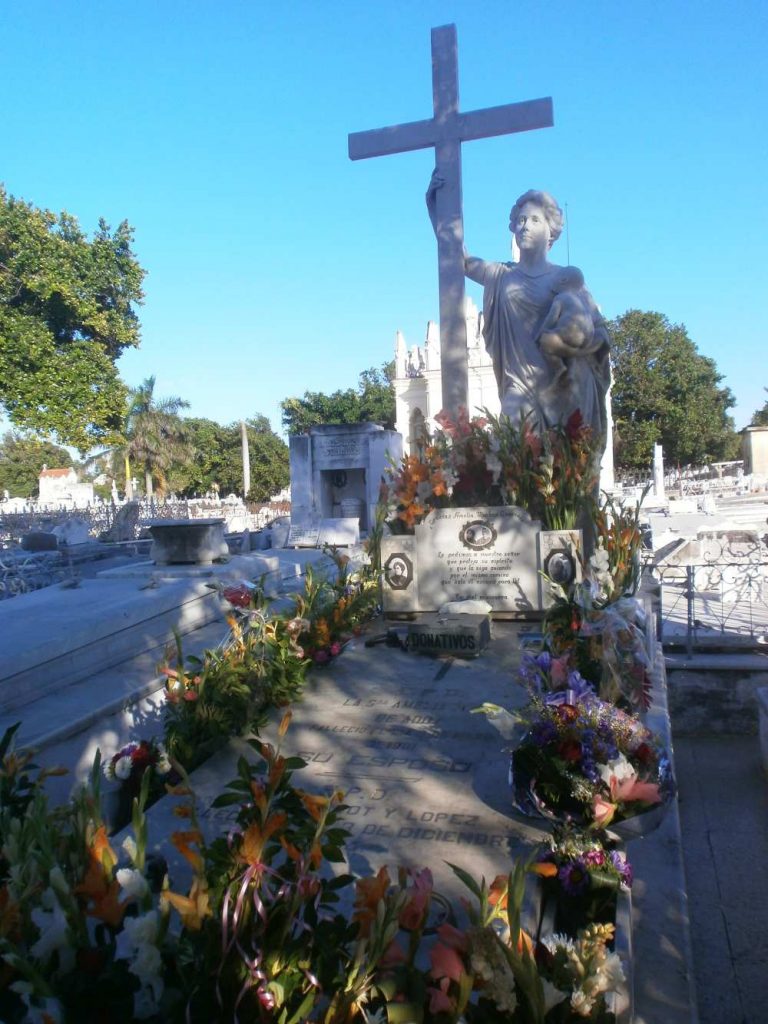 Beyond the image of sadness associated to the cemeteries, there are inspirational stories, legends and secrets. Certain places are so special that we can feel the magic in the air the minute we step on them. That’s the case of Colón Cemetery considered the biggest cemetery in America and the fourth most important necropolis in the world.

Espíritu Travel’s Long Weekend in Havana trip will take you in a beautiful tour to discover the impressive Cementerio de Colón.

Back in the 19th century, there was still in Cuba the medieval habit of burying people inside the churches. However, Bishop Don Juan de Espada y Landa, soon realized that this sacred tradition was becoming obsolete not only because of the increasing size of the population but because the hygienic problems associated to it. That’s how in February 2nd 1806 the General Cemetery of Havana, known as Espada Cemetery, was inaugurated at the western area of the city.

Just a detail was missing in the creators design, the population continued growing and already in 1850 there was not more space for new burials. The idea of creating a huge cemetery, exquisitely designed came slowly into the functionaries’ minds, however they couldn’t imagine the little San Antonio el Chiquito cemetery was going to be turned into the Cementerio de Colón, National Monument and a place of mandatory visit for every Cuban.

The young Spanish architect Calixto de Loira y Cardoso was the designer and working director of the new cemetery. He chose a romantic-byzantine style to create the severe and solid aspect the place required. In the first hours of October 30th 1871, under a strong rain the construction begun, just to finish 15 years later.

Despite the inscription of the majestic front entrance “JANUA SUM PACIS” (I am the Peace door), the construction of Colón Cemetery was anything but peaceful: budget problems, strange accidents and even the early decease of its creator lead the people to believe that the necropolis was cursed. And there was not a single person who dare to pass near to its gates during the night.

Nevertheless the cemetery of Havana continued growing and today is an emblematic part of the lively Vedado. Considered an open-air museum, it’s extended by 56 hectares with more than 53000 monuments made of Carrara marble and expensive Italian, Swedish and Spanish granite. Without the richness in figures of the famous Pere-Lachaise Cemetery of Paris, the Cementerio de Colón is a fabulous reflex of the heterogeneous roots of Cuba. There you will find bishops, patriots, Afrocuban mausoleums and presidents side by side. A horse figure will announce you the tomb of the Chess Master José Raúl Capablanca, while, more discrete places gather famous writers such as Alejo Carpentier and Dulce María Loynaz, sculptors such as Rita Longa and musicians such as Amadeo Roldán.

Colón Cemetery treasures the most beautiful legends. It was meant to keep the difference in social levels beyond death, but time is a very tricky emissary and the stories of treason, love, heroism or humorous episodes have gave each tomb its place no mattering if it’s poor or rich. We introduce you to some of them:

The first construction of the graveyard was the Galena de Tobías, a great catacomb of 526 niches to receive the deceased from Espada’s cemetery. Intensely worked Calixto de Loira to finish the Galena, but it was too much for him and he died with only 32 years, resulting the first occupant of the new tomb.

Curiously, the man who took his place Don Francisco de Azúa, didn’t lasted much neither and he was buried at the opposed extreme of the catacomb.

The mausoleum dedicated to the 8 students of Medicine, is one of the most impressive tombs of Colón Cemetery. It was erected to immortalize the memory and vindicate the innocence of a group of very young students of the School of Medicine of Havana condemned to death under false accusations.

It was during the colonial times, when the Independency War of 1868 covered the countryside with fire, when several students of Medicine decided to play at the unfinished Colón Cemetery area. Next day, not only them but other young men were incarcerated and accused of profaning the grave of Gonzalo de Quesada, a Spanish General. Defensive speeches from respectable figures of the epoch and innocence probes weren’t sufficient. On November 27th 1871, at Havana Prison, 8 teenagers where fusilladed by the Spanish forces.

One of his fellow survivors, Doctor Fermín Valdés Domínguez, sought tirelessly for 16 years the remains hided by the authorities, until his efforts were crowned with success. From the pages of La Lucha journal, he called on the nobility and solidarity of the people to raise the necessary funds to build a monument to the victims. In November 27, 1890, the mausoleum with the beautiful and symbolic monument made by José Villalta de Saavedra was inaugurated and every year in November 27th a massive march departing the the University of Havana honors the 8 students of Medicine murdered.

The highest monument of Colón Cemetery is dedicated to the heroic firemen who were killed at the Isasi accident: 21 meters from the ground to the top.

History tell us about the fire which started in May 17th, 1890, at Havana’s store Isasi. The owner was a Spaniard called José Antonio which answered negatively to the customary questions about the presence of explosive or flammable materials in the place.

Firemen arrived and many neighbors also helped to suffocate the fire, but soon after two terrible explosions buried them. That night 32 people died, 25 were firefighters, basically voluntary helpers who integrated the Firemen Forces after their working hours. The population and the authorities agreed to build a great memorial to the victims’ heroism. More than 10 000 people were present during the inauguration in 1897. The tomb, made in Carrara marble is a wonderful mausoleum were the chains with form of tears represents the pain of the Cuban people.

Jeannette Ford Ryder was an American activist who travel to Cuba in 1869 and founded the Band of Piety. This charity organization developed a singular labor protecting orphans, street women, and poor people in general and domestic animals.

When Jeannette passed away, her friends and even the cemetery workers were surprised: Rinti, her faithful dog, didn’t want to leave the tomb. He stayed there rejecting food and water until he rejoined his master. The sculptor Fernando Boada made time after the sculpture we can see today, a real representation of love and fidelity beyond death.

One of the most famous love stories of Cuba lies at Colón Cemetery in Havana, a monument where the caring and the profusion of fresh flowers surprises travelers and locals: it is the grave of Amelia Goyre de la Hoz, also known and admired as The Miraculous Lady.

At the beginning of the 20th century, Amelia Goyri de la Hoz, the only daughter of an aristocratic family married his cousin José Vicente Adot y Rabell, a humble young man with the grade of captain obtained in the Cuban Independency War as his only possession. Against the family will, they lived happily during a year, however in May 3rd 1903, Amelia died giving birth to a girl, who didn´t survive. The young woman was buried with her child between the legs (a custom of the epoch) in a vault payed by the husband’s friends.

According to popular memories, Vicente never accepted his lost and never married again. Day after day, until his death, he came along the tomb of his beloved family dressed rigorously in black. He would come through the right side and knock three times with the bronze latch, as a secret signal to “wake up” Amelia. After a long conversation with her, Vicente would leave the place without ever turn his back to the grave.

The detail that excited Havana´s imagination arrived six years later with the decease of Amelia´s father. José Vicente wanted to see his wife one more time. And how great was his surprise when he discovered that both bodies were intact and, as a maternal love symbol, the baby buried over Amelia’s legs was now in her arms. The story inspired Cuban sculptor José Vilalta Saavedra who finished in 1914 the monument we can find nowadays over the tomb, representing the 23 years old woman with the baby on the left arm, while the right touches a Latin cross, emblem of the sacrifice.

Popular imagery couldn´t explain the fact, on the contrary an increasing number of person started to visit the grave, asking for her kindness. She became The Miraculous Lady and people adopted the husband’s ritual in order to obtain help from her. The great prosperity reached by the widower was associated to the good influence of Amelia and the legend of her miracles transcended generation after generation.

Today the beautiful sculpture continues looking to the sky, respected and loved for many people. The Miraculous seems to intervene in fertility and children health problems, risky pregnancies and justice complications. Cuban believers come to see her with faith and humility, knocking three times at her grave and leaving the place without turning their backs.

If you want to uncover this marriage of history and time, contact Espíritu Travel. You will be mesmerized by the magnificence of Colón Cemetery.